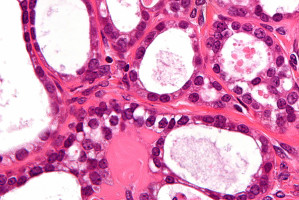 Results of a biomarker analysis of the NRG Oncology NRG-GY004 trial were presented at a Seminal Session during the Society for Gynecologic Oncology’s (SGO) Annual Meeting on Women’s Cancer in March 2022.

The analysis, which occurred as part of a preplanned translational endpoint for the study, concluded that homologous recombination repair mutant type (HRRmt) was prognostic of progression-free survival and predictive for activity of olaparib when compared to the standard of care, platinum-based chemotherapy for women with recurrent platinum-sensitive ovarian cancer.

The NRG-GY004 trial did not reach its primary goal of improving progression-free survival in this patient population by treating with either olaparib alone or a combination of olaparib and cediranib when compared to the usual chemotherapy.

However, data collected on the trial suggested that study participants with BRCA mutations displayed clinically significant activity in a prespecified analysis when treated with the experimental drugs.

Homologous recombination deficiency (HRD) status was successfully measured by the BROCA-HR assay for 470 of the 565 patients enrolled on the trial.

BROCA-HR is a targeted next generation sequencing platform including all known gynaecologic cancer susceptibility genes and other DNA repair or related genes as well as a 3100 single nucleotide polymorphism panel for loss of heterozygosity (LOH) analysis.

Genes included as HRD were ATM, BARD1, BRCA1, BRCA2, NBN, PALB2, RAD51C, and RAD51D. BRCA1 and BRCA2 mutations comprised of 90% of the HRR mutations in the analysis.

“This analysis provided us with the knowledge that a subgroup of the population of women treated on the trial derived significant clinical benefit from olaparib or combination olaparib and cediranib,” stated Joyce F. Liu, MD, MPH of the Dana-Farber Cancer Institute and the study chair of the NRG-GY004 trial.

“Due to the potential complications from repeated exposure to platinum-based chemotherapy experienced by women with recurrent platinum-sensitive ovarian cancer, it is incredibly important to continue to test treatment alternatives that incur less of a burden on the patient with the same efficacy. More personalized, targeted approaches could benefit certain patients depending on the biomarker subgroup.”

Although LOH status was also explored, LOH was not prognostic for progression-free survival independent of BRCA status. LOH was also not predictive for activity of either experimental treatment arm when compared to chemotherapy.