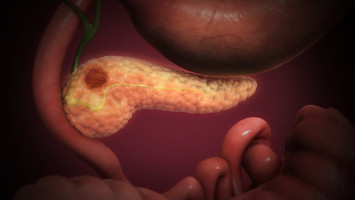 Theranostics have the potential to both diagnose cancers and treat them, all in one package. But it’s challenging to tell when — or even if — the package has reached and penetrated a tumour.

Now, researchers reporting in ACS’ JACS Au have designed a nanoparticle system that can get through tough pancreatic cancer tumours, releasing fluorescent dyes in human cell samples and 3D lab-made tumour masses for diagnostics and therapy.

The most common type of pancreatic cancer, called pancreatic ductal carcinoma, is also one of the most difficult cancers to diagnose and treat. Studies have shown that 5-year survival rates of people with the disease are very low.

The tumours are often dense, and it is challenging for imaging dyes and medicines to reach cells deep within the mass.

Researchers have been developing theranostics that specifically enter tumour cells, but few systems allow scientists to track this uptake or to see how deeply the compounds penetrate. So, Hui Li, Zhiqian Guo and colleagues wanted to solve this problem by designing a new delivery system that includes dyes that only fluoresce under certain conditions.

The team prepared a nanoparticle that remained intact until it encountered the acidic environment of pancreatic tumour tissue. The particle carried two dyes that would only fluoresce once the nanoparticle broke apart.

After an initial characterization of the nanoparticle-dye system, the researchers added it to a 3D spheroid of pancreatic cancer cells. They found that the dyes reached the interior of the cellular structure when delivered via the nanoparticle.

This nanoparticle delivery system could eventually be used to deliver targeted chemotherapies within tough-to-penetrate pancreatic cancer tumours, the researchers say.

The American Chemical Society (ACS) is a nonprofit organization chartered by the U.S. Congress. ACS’ mission is to advance the broader chemistry enterprise and its practitioners for the benefit of Earth and all its people.