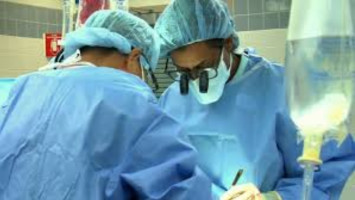 The U.S. Food and Drug Administration (FDA) today approved an imaging drug known as pafolacianine, which is attracted to ovarian cancer tissue and illuminates it when exposed to fluorescent light, allowing surgeons to more easily find and more precisely remove cancer.

Physicians at the Center for Precision Surgery in the Abramson Cancer Center at the University of Pennsylvania led one of the largest clinical trial site in the country for the drug, in a partnership with the Indiana-based On Target Laboratories.

The approach brings fresh hope to patients diagnosed with ovarian cancer, about half of whom experience a recurrence of their disease after initial treatment. Penn investigators have pioneered targeted technologies for lung, brain, and urinary tract cancers.

Only 20 percent of ovarian cancers are found early, as there are often no symptoms – or they may mimic other common bladder, bowel, or gastrointestinal issues – and there is no screening test like those for breast and cervical cancer.

By the time most women receive their diagnosis, the disease has advanced, which can include spread to intra-abdominal organs. Most patients then require surgery — also called cytoreduction, or debulking surgery — in an effort to remove tumours, as well as receiving chemotherapy.

“Lighting up cancer, which helps to identify lesions that may be difficult to find—especially in the presence of scar tissue or other organ damage—enables more complete identification and surgical removal of cancer that could have otherwise been missed,” said Janos L. Tanyi, MD, PhD, an Associate Professor of Obstetrics and Gynecology in the Perelman School of Medicine at Penn and Principal Investigator at Penn’s clinical trial site for Phase 2 and Phase 3 studies. “This FDA approval offers promise in improving outcomes for patients with ovarian cancer who face a high risk of recurrence after their initial treatment.”

In the randomized, multi-centre Phase 3 study, nearly 27 percent of the 134 adult women who received the diagnostic agent Cytalux – which is administered intravenously prior to surgery – and were evaluated under both normal and fluorescent light had at least one cancerous lesion detected that was not discovered by standard inspections through sight or touch during surgery.

By using the new technology to illuminate tumours, surgeons have a guide that allows them to go beyond what they can otherwise see with the naked eye or feel, particularly when lesions are small. This provides not only greater precision in the removal of cancer lesions but also spares healthy tissue. The newly approved dye also helps surgeons to find cancerous lymph nodes.

Sunil Singhal, MD, Director of the Center for Precision Surgery at the Abramson Cancer Center and William Maul Measey Professor in Surgical Research, began searching more than a decade ago for a targeted method to visualize rogue cancer cells, beyond what surgeons could see with the naked eye or feel with the fingers. The answer would arrive from his studies into tumour permeability and small molecule retention. What separates this agent from the prior art was the ability to selectively target cancer cells with a fluorescent contrast agent.

Dr. Singhal went on to explore this hypothesis in clinical studies involving more than 1,000 patients at Penn since 2012. His studies with Cytalux were initiated with preclinical studies before proceeding to humans.  Ultimately, Penn and the Center for Precision Surgery was the leader for the Phase 1, Phase 2 and Phase 3 clinical trials.  This investigational series may now constitute the largest clinical experience with intraoperative molecular imaging with targeted fluorochromes in the world.

“By using a fluorescent dye that binds to cancer cells, making them glow during surgery, surgeons can identify and resect as much of a patient’s tumours as possible and improve prognosis,” Singhal said. “At every step in their treatment, we want to help offer patients the very best possible outcomes, and this approach is an important step towards greater precision during surgery for an array of different cancers.”