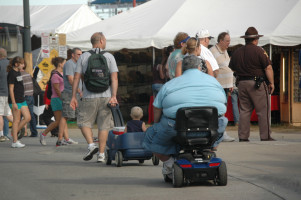 Further findings showed that cumulative relative chemotherapy dose was associated with survival so may explain the poorer survival that has been seen in obese patients receiving adjuvant chemotherapy for colorectal cancer.

"Adjuvant chemotherapy is dosed according to a person's body surface area, which is calculated from their height and weight.

But in obese patients (with a high body mass index (BMI), and who are more likely to have high BSAs), doses are often capped, or based on an idealised weight, because of concern that large doses might increase side-effects.

"Our study has demonstrated an association between increasing body mass index and modest reductions in the cumulative relative dose of adjuvant chemotherapy in patients with colorectal cancer.

And we also saw an association between increased cumulative relative dose and improved survival," she said. "This supports the recently published ASCO guidance that full, weight-based chemotherapy doses should be used to treat obese adult patients"

Commenting on the findings, Elizabeth Smyth, Addenbrooke's Hospital in Cambridge, UK, member of the ESMO Faculty for Gastrointestinal tumours, said: "Dose reductions for high BMI may be associated with lower cure rates in resected colon cancer treated with adjuvant chemotherapy." She added: "Adjuvant chemotherapy has the potential to cure patients with residual micrometastatic disease following curative surgery, so it is important that we maximise the benefits for all patients."

A number of previous studies have shown that obese patients with colorectal cancer have worse outcomes than non-obese patients.

But limitations with these studies made it difficult to draw conclusions as to whether having a higher body mass index was directly associated with survival or if the association was due to other factors such as treatment (i.e. dose administered).

"One important factor is how chemotherapy doses are calculated for individual patients. We carried out our study to better understand the relationship between BMI, chemotherapy dosing and survival in colorectal cancer," explained Slawinski.

"We looked at two ways of measuring how much chemotherapy had been received as a proportion of actual-to-expected standard doses: average cumulative relative dose (ACRD) and average relative dose intensity (ARDI)."

ACRD is the proportion of the total expected standard dose (per unit of body surface area) over the whole chemotherapy course that has actually been received.

ARDI however, also takes into account the duration of treatment, and is the proportion of the expected standard dose intensity (the total dose per unit of BSA, divided by the number of weeks of treatment) that has actually been received.

With both measures averaged over the number of drugs in the regimen, and expressed as a percentage.

However, there was no significant association with ARDI.

Slawinski suggested that the lack of association between survival and ARDI may be because ARDI is a less sensitive measure of reductions in total (cumulative) dose of chemotherapy.

"These results showed that elevated BMI is associated with a reduced relative dose of chemotherapy in the first treatment cycle and a modest reduction in ACRD.

These indirect effects through sub-optimal treatment might explain poorer survival in obese patients, rather than direct effects of obesity resulting from, for example, tumour biology," concluded Slawinski.

"Our results so far support giving obese patients a full dose of chemotherapy based on their body weight. But we are still exploring toxicity data, examining the relationship between BMI, dose capping, toxicity and survival," she cautioned.

"Toxicity has the potential to reduce quality of life and can be life threatening. And there may also be other reasons for reducing chemotherapy doses, such as comorbidities, so it is important that dosing and treatment decisions are individualised to the patient."

Smyth agreed: "The main message from this study is that we should consider whether dose reductions are necessary in patients with a high BMI when treating them with adjuvant chemotherapy."

But she added: "Dosing chemotherapy is complex and includes not only weight but fitness, co-morbidities including renal function and dihydropyrimidine dehydrogenase (DPD) testing results."

Smyth considered that more studies are needed before changing practice. "Prospective studies examining the impact of higher doses of chemotherapy may be needed, especially as there is an increase in the proportion of patients diagnosed with cancer and who are obese."

For now, she concluded: "We should take all aspects of the patient into account when making chemotherapy dosing decisions. Dose reductions do seem to be associated with less good survival in this study, but these may still be required for safety."