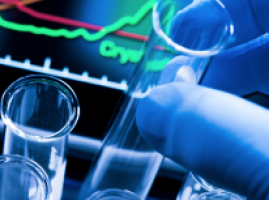 Tumours of the pancreas are particularly feared.

They are usually discovered late and mortality is high.

Until now, no targeted and personalised therapies exist.

This provides new insights into the origin of the tumours.

In the more aggressive group of tumours, a phenomenon known as "viral mimicry" leads to a cancer-promoting inflammatory reaction.

This could possibly be the starting point for the development of a targeted, subtype-oriented therapy.

The results have now been published in the journal Cancer Discovery.

The disease usually progresses without symptoms over a long period of time and is only diagnosed in advanced stages - when it is difficult to treat.

The mortality rate for this tumour disease is therefore particularly high.

In contrast to many other cancers, scientists have not yet succeeded in identifying efficient targets for a targeted personalised therapy.

Most patients with an advanced tumour disease receive a similar treatment - usually consisting of a combination chemotherapy.

About 95 percent of all cases of pancreatic cancer are so-called adenocarcinomas.

"In the past, there have been attempts to work out genetic differences, but it turned out that all adenocarcinomas of the pancreas carry a similar collection of mutations," explains Andreas Trumpp, stem cell researcher at DKFZ and HI-STEM.

Trumpp's team has now chosen a different approach in collaboration with the Department of Surgery at Heidelberg University Hospital.

The researchers then searched the genome of the purified tumour cells for differences in the methylation pattern.

These are chemical labels attached to the DANN molecule that determine whether a gene segment is active or not.

"Based on the methylation patterns of the tumour genomes, we were able to define two completely different subtypes of adenocarcinomas, which differ in the course of carcinogenesis and in their aggressiveness," says Elisa Espinet, first author of the current publication.

One of the two subtypes is much more aggressive and actually develops directly from the ductal cells lining the ductal system of the pancreas, while the less aggressive tumours develop from glandular cells.

"We have thus discovered a molecular signature that allows us to distinguish between two subtypes of pancreatic carcinoma that are also clinically different," explains Espinet.

What's more, upon closer analysis of the methylation patterns, the Heidelberg researchers discovered that very specific regions in the genome carry fewer methyl groups in the more aggressive subtype.

These genome regions contained sequences of so-called endogenous retroviruses, remnants of viruses that have remained in the human genome during evolution.

Due to the methylation of their DNA, they are normally silenced and do not play a significant role in healthy individuals.

In this subtype, however, they become active again when the methyl groups are removed and form double-stranded RNA strands.

This type of RNA molecule does not normally occur in the body and is therefore a warning signal for the immune system that viruses have entered the cell.

As a result, the interferon system is activated and tries to fight the invading viruses.

As a result, inflammatory messengers are also released in the vicinity of the tumour.

In the tumour, the viral mimicry promotes certain inflammatory reactions that further drive cancer growth and, in addition, probably stimulates metastasis, i.e. the formation of the dreaded daughter tumours.

The DKFZ researchers found viral mimicry only in the ductal subtype and in traces also in healthy ductal cells, but not in the healthy glandular cells of the pancreas or the pancreatic cancer cells of the less aggressive subtype.

This explained why pancreatic tumours that develop directly from the cells of the pancreatic ducts, which accounted for about one third of the tumours studied, are particularly aggressive.

At the same time, the result opens up new perspectives for a more targeted and personalised therapy of pancreatic cancer.

"By blocking the interferon signaling pathways at various sites, we were able to significantly slow down cancer growth in mice to which human pancreatic cancer cells had been transferred.

However, the regulation of these signals is highly complex.

We are now looking for ways to not only slow down the tumour cells, but actually eliminate them," says Trumpp, explaining the further progress of preclinical research.