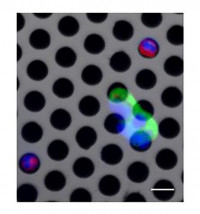 A new generation of pathology labs mounted on chips is set to revolutionise the detection and treatment of cancer by using devices as thin as a human hair to analyse bodily fluids.

"The technology, known as microfluidics, promises portable, cheap devices that could not only enable widespread screening for early signs of cancer but also help to develop personalised treatments for patients," said Ciprian Iliescu, a co-author of the review.

Details of these microfluidic methods for cancer analysis have been published in the journal Biomicrofluidics.

"If you isolate some cells and expose them to drug candidates, you can predict the response of the patient in advance," said Iliescu, a researcher at IMT-Bucharest in Romania. "Then you can track how the tumour is evolving in response to treatment."

The devices scan blood, saliva or urine for certain cells, proteins or tissue that are produced by tumours and then spread throughout the body.

The use of fluids as a liquid biopsy, instead of a conventional solid biopsy from a tumour, has many advantages.

It is less invasive, reducing patient discomfort, and also provides information about hard-to-access tumours, such as in unborn children.

Because the biological clues, or biomarkers, of cancer end up in the bloodstream, a liquid biopsy can give insights to genomic state of all cancer in the body, including at its primary site and if it has spread.

The authors call these insights understanding the "global molecular status of the patient."

The biggest challenge is the diversity of cancer.

Each of the more than 100 known cancers have their own biomarkers, which the authors classify into four categories: cellular aggregates (circulating tumour microemboli); free cells (circulating tumour cells, circulating endothelial progenitor cells and cancer stem cells); platelets and cellular vesicles (exosomes) and macro- and nanomolecules (nucleic acids and proteins).

A wide range of microfluidic devices are being designed to isolate these biomarkers, leveraging on the boom in nanofabrication in recent decades.

Some devices also use electrical, magnetic or acoustic fields to help select the biomarker target and even have smart, built-in electronic circuits for data processing.

There are already devices on the market, such as CellSearch, which isolate circulating tumour cells.

However, more sensitive and faster systems are being developed for many different cancer biomarkers.

Combining more than one method may help with accuracy, although at the cost of speed.

Sensitivity can also be improved by culturing the biomarkers to increase their concentration.

Iliescu said the field has potential but is still in its infancy.

"We need more and more clinical tests to bring this technology to maturity," he said.