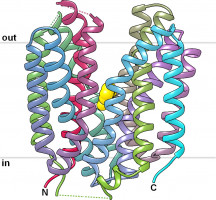 Certain cancer cells depend on exporting the metabolite lactate, which accumulates during the generation on energy.

Lactate plays an important role in many biochemical and cellular processes.

In healthy cells it is produced if our body is not supplied with enough oxygen during intensive exercise.

During this anaerobic energy production, lactate accumulates in cells and acidifies them.

In certain cancer cells, metabolic processes are disturbed and large amounts of lactate are produced even if the supply with oxygen is sufficient to cover the energy demand.

This phenomenon is known as the 'Warburg Effect', which was observed for the first time by Otto Warburg, for whose discovery he was awarded the Nobel Prize for Physiology or Medicine in 1913.

The transporter increases the lactate concentration outside the cell and acidifies the cell surrounding.

This supports tumour growth and metastasis as the exported lactate is taken up into other cancer cells by another transport protein (MCT1), where it serves as fuel.

Therefore, inhibiting MCT1 and MCT4 is a promising approach to fight certain types of cancer.

However, so far no approved inhibitors for these transporters are on the market.

"In order to develop such potent and highly selective inhibitors detailed knowledge of the structures of MCT1 and MCT4 is important", said Dimitrios Fotiadis from the Institute of Biochemistry and Molecular Medicine (IBMM) of the University of Bern and the National Centre of Competence in Research (NCCR) TransCure.

Both transporters belong to the so-called "Solute carrier 16"-family (SLC16), which is responsible for the delivery of essential substances in the body and which also plays an important role in the uptake, action and excretion of drugs.

Therefore, MCT1 and MCT4 are particularly suited as therapeutic targets.

No structure of an SLC16 lactate-transporter has been determined and published until now.

The research group of Dimitrios Fotiadis succeeded in this now.

The results of the study have been recently published in the journal Nature Communications.

Fotiadis' team published the first structure of a lactate-transporter of the SLC16-family (SfMCT) at high-resolution that is related to MCT1 and MCT4.

"Based on this long sought-after structure of a protein of the SLC16-family we obtained insights into the molecular working mechanism of these proteins", said Patrick Bosshart from the IBMM and the NCCR TransCure, who is first author of the study.

The researchers also investigated the transport properties of SfMCT and possible binding sites for inhibitors.

"The solved structure of SfMCT together with our detailed transport study can contribute to the structure-based design of drugs that target MCT1 and MCT4 using homology models", said Fotiadis, who is last author of the study.

The fact that the binding site in the solved structure of SfMCT is accessible from the outside of the cell (so called 'outward-open' conformation) is an important observation.

This conformation is essential from a pharmacological perspective in order to generate models of MCT1 and MCT4 based on the structure of SfMCT and to test inhibitors using these models.

The study was financially supported by the Swiss National Science Foundation (SNSF) and the National Centre of Competence in Research (NCCR) TransCure, located at the University of Bern.

Many major human diseases such as diabetes, hypertension, cardiovascular diseases, cancer, osteoporosis, neurodegenerative and psychiatric disorders are related to or are based on the dysfunction of membrane transporters and channels.

Transporters are integral membrane proteins that move important substances such as nutrients, drugs and other substrates across cellular membranes.

Because of their importance as cellular gatekeepers, a deep understanding of their structure, functioning and role in diseases is of fundamental significance for advances in basic research and for the development of novel therapeutic drugs.