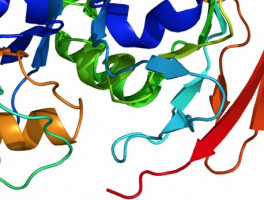 The investigational anticancer therapeutic LOXO-195 (now known as BAY 2731954), which targets a family of proteins called TRKs, was safe, tolerable, and showed signs of clinical activity in patients who had solid tumours that harboured NTRK gene fusions and had become resistant to other TRK-targeted therapeutics, according to results from patients enrolled in a phase I clinical trial and a U.S. Food and Drug Administration (FDA) expanded access program, which were presented at the AACR Annual Meeting 2019, March 29-April 3.

"Although these genetically defined cancers are rare, accounting for about 0.5 percent of all cancer cases diagnosed in the United States, a high percentage of patients respond to treatment with TRK inhibitors, including larotrectinib [Vitrakvi], which was approved by the FDA in November 2018.

"Unfortunately, most tumours that initially respond eventually become resistant to first-generation TRK inhibitors like larotrectinib," continued Hyman. "This is frequently because the tumour has acquired mutations in NTRK that reduce the ability of the therapeutic to block TRK activity."

Hyman explained that LOXO-195 is a next-generation TRK inhibitor designed to be able to block TRK activity even if a tumour has acquired NTRK resistance mutations.

All the patients, who included seven children and 24 adults, had previously been treated with at least one first-generation TRK-targeted therapeutic.

As of Dec. 3, 2018, 29 of the patients were evaluable for response. Ten of the patients (34 percent) had a confirmed complete or partial response, as assessed by RECIST 1.1 criteria.

When the researchers analyzed the data based on the mechanisms underlying resistance to the first-generation TRK inhibitors, they found that nine of 20 patients (45 percent) whose tumours were determined to have become resistant by acquiring an NTRK gene mutation had a complete or partial response.

None of the three patients whose tumours were determined to have become resistant by TRK-independent mechanisms responded to LOXO-195.

"We were pleased to see that the response data were consistent with what we expected based on our biological understanding of the mechanisms of resistance identified in these patients," said Hyman.

"Given how promising our early data are, I would encourage patients who have disease progression after treatment with a first-generation TRK inhibitor to seek out a clinical trial testing a next-generation TRK-inhibitor," added Hyman.

In the phase I clinical trial, a range of doses of LOXO-195, from 32 mg daily to 150 mg twice daily, were tested. Observed toxicities were consistent with the anticipated side effects of TRK inhibition, according to Hyman.

The most common adverse events, regardless of investigator attribution, were dizziness/ataxia, nausea/vomiting, anaemia, myalgia, abdominal pain, fatigue, and lymphopenia. Dose selection is ongoing in both children and adults.

According to Hyman, the main limitations of the study are the small number of patients treated to date and the fact that some patients were treated through an FDA expanded access single patient protocol, which means that the completeness of data collection for these patients was less than for the patients enrolled in the clinical trial.