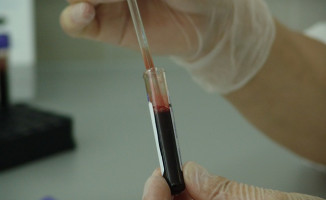 Proteins that normally reside inside cell nuclei have never been found in the blood - until now.

Among the molecules that they used their new test to find was a mutated protein thought to be restricted to the inside of cells, mostly within the nucleus.

It is the first time that single-molecule imaging has been applied to visualise disease-causing molecules in blood.

They used this new technique to detect molecules commonly screened for in standard blood tests, like prostate-specific antigen.

Mutant p53 is a well-known tumour-specific nuclear protein and has never before been detected in the blood, likely because current tests cannot detect its extremely low blood concentrations.

Wang and colleagues found mutant p53 or anti-p53 autoantibodies in samples from patients with ovarian cancer, but not in patients without cancer.

PD-L1 is also found on the surface of some cancer cells and has recently been effectively targeted with immunotherapy to combat cancer.

Knowing whether or not a patient's tumour expresses PD-L1 is a crucial first step in this treatment and SMAC may be able to identify cancers that have PD-L1 at low levels that are undetectable by standard blood tests.

"With SMAC, we have brought single-molecule imaging into the clinical arena. By visualising and examining individual molecules released from diseased cells into the blood, we aim to detect diseases more accurately and gain new insights into their mechanisms," Mao explained.

Wang and colleagues are hopeful that their test will one day be commercially available.