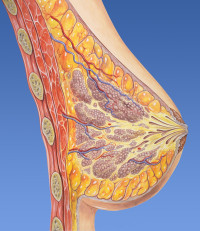 About 15 percent of breast cancers are classified as triple-negative, lacking receptors for estrogen, progesterone, and Her2.

These cancers do not respond to targeted hormonal therapies, and they tend to be particularly aggressive, often resisting systemic chemotherapy and metastasizing to other tissues.

Researchers had observed that triple-negative breast cancer (TNBC) patients who had higher numbers of a type of immune cell called myeloid-derived immunosuppressor cells (MDSCs) in their bloodstream had poorer outcomes.

But until now it wasn't clear how MDSCs are recruited to the primary breast tumour and how they contributed to its progression and spread.

A new report led by the University of Pennsylvania School of Veterinary Medicine's Rumela Chakrabarti, an assistant professor of biomedical sciences, and Sushil Kumar, a postdoctoral researcher in Chakrabarti's lab, fills in crucial details about the connection between MDSCs and aggressive disease.

In The Journal of Clinical Investigation, Chakrabarti, Kumar, and colleagues identify a protein, deltaNp63, on tumour cells that directs MDSCs to the tumour and metastatic sites, where they promote tumour growth and metastasis.

Blocking either this protein or the MDSCs themselves reduced tumour growth and metastasis in a mouse model of TNBC.

"We're excited because we think our findings could make a big difference for triple-negative breast cancer patients," says Chakrabarti. "Not only can deltaNp63 be used as a biomarker to help personalise treatment regimens, but targeting it may also provide an additive treatment for triple-negative breast cancer, in addition to chemotherapy and radiation."

Earlier studies by Chakrabarti and colleagues showed that increased levels of deltaNp63 were linked with breast cancer initiation.

In the current work, her team found deltaNp3 was elevated in samples of TNBC patient's primary tumours, as were numbers of MDSCs.

Intrigued, Chakrabarti, Kumar, and their coauthors used multiple mouse models and tissue transplants to see how manipulating the level of deltaNp63 affected the behaviour of cancer, and they found lower levels corresponded with less metastasis to distant tissues.

In addition, knocking down levels of deltaNp63 made the tumours much less aggressive, and it reduced numbers of MDSCs recruited to the tumour but not other immune cell types.

The research team used small molecules to inhibit CXCL2 and CCL22 in human TNBC cell lines as well as in a mouse model of TNBC, a blockade that significant reduced levels of MDSCs moving to the primary tumour and that substantially lowered signs of metastasis.

Chakrabarti believes that a drug that zeroes in on MDSCs could fill a gap in triple-negative breast cancer treatment.

Offered in conjunction with more general therapies such as chemotherapy and radiation,

it may give patients an option that is more tailored to their cancer.

Her lab is now working with animal models and cell lines derived from breast-cancer patients to test this combination approach to treatment.