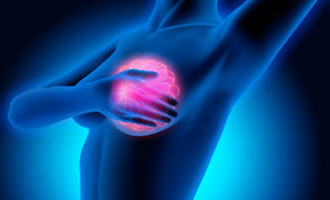 After decades of research and two previous drug development attempts, things are looking promising for a team of University of Arizona researchers working on a less toxic treatment for a specific type of breast cancer.

The researchers have developed a drug compound that appears to stop cancer cell growth in what's known as triple-negative breast cancer.

The drug, which has not yet been tested in humans, has been shown to eliminate tumours in mice, with little to no effect on normal healthy cells, making it potentially nontoxic for patients.

The therapy is based on a newly discovered way that a gene known as epidermal growth factor receptor, or EGFR, leads to cancer.

EGFR is a long-investigated oncogene – a gene that in certain circumstances can transform a cell into a tumour cell.

The researchers' findings are published in the journal Cancer Gene Therapy, and the team is working to get Food and Drug Administration approval to test the compound in phase 1 clinical trials in humans.

Triple-negative refers to the fact that the cancer cells test negative for the three other types of breast cancer – those driven by too much oestrogen, too much progesterone or too much of a protein called HER2, according to the American Cancer Society.

Triple-negative breast cancer is more common in women under 40 who are Black or who have a specific mutation in a gene called BRCA1.

About half of all cases of triple-negative breast cancer overexpress the EGFR oncogene, according to the National Institutes for Health.

The UArizona researchers devised a compound that blocks EGFR from going to a part of the cell that drives survival of the cancer.

The compound shuts down functioning of the EGFR protein that acts in cancer cells but not normal cells.

Often, drugs aren't targeted enough in their attack and so they will attack parts of other, healthy cells, resulting in unwanted side effects.

The researchers wanted to prevent that.

"EGFR has been known to be an oncogene for six decades, and there's a lot of drugs out there trying to target it, but they all had limitations that didn't make them workable as drugs for breast cancer," said Joyce Schroeder, who co-wrote the paper with lead author Benjamin Atwell, a postdoctoral student in the Department of Molecular and Cellular Biology.

Schroeder heads the university's Department of Molecular and Cellular Biology and leads the lab where the research for the paper was conducted.

She is also a member of the university's BIO5 Institute and Cancer Centre.

The first two drug technologies that she and her team created worked to kill the cancer cells, but they had problems.

In their first attempt, the researchers targeted what Schroeder called an "unstructured" part of the EGFR protein, and as a result, the compound couldn't act consistently and reliably.

The second attempt resulted in a compound that was too generalised and hit a part of the protein that also drove normal activities in healthy cells, making the drug toxic.

To be effective, Schroeder and her team knew that they had to develop a compound that could enter a cancer cell and target the exact right part of the proteins created by the EGFR gene to stop cancer from spreading.

They succeeded on their third attempt.

She and her team knew they had to find a solution that would not impact a normal cell and that would remain active inside the body.

"When we tested the drug in animal models, we got this fabulous result where it actually didn't just stop the tumours from going, it caused them to regress and go away, and we're seeing no toxic side effects," she said. "We are so excited about this because it's very tumour specific."

Like designing a key to fit a very specific lock, molecular and cellular biologists ideally design drug chemistry that will interact with the target protein in the exact right way and nothing else.

Many researchers thought that maybe EGFR shouldn't be the target, so they looked for new ones.

Schroeder, on the other hand, thinks EGFR is just working in a way that researchers don't yet understand.

She and her team attempted to target it in a novel way, with success.

The next step, besides human trials, is to test the drug's ability to suppress metastasis, which occurs when cancer cells spread to other parts of the body, Schroeder said.