Prof Sattva Neelapu speaks to ecancer at the ASH virtual 2020 congress about the ZUMA-12 study.

He outlines the interim analysis of ZUMA-12 which is a phase 2 study of axicabtagene ciloleucel (Axi-Cel) as first-line therapy in patients with high-risk large B cell lymphoma (LBCL).

Prof Neelapu explained the trial design and eligibility, before outlining the treatment regimen.

He gives details of the results and toxicity profile with regular but manageable CRS.

We enrolled a total of 32 patients as of the data cut-off who received cyclophosphamide and fludarabine conditioning chemotherapy followed by a single infusion of axi-cel at a dose of two million CAR positive cells per kilogram bodyweight. The median follow-up on the study was a little over nine months and this was a planned interim analysis. The best overall response rate on the study was 85% and the complete response rate was 74%. As of the data cut-off, 70% of the responses are ongoing.

We also found that the axi-cel product had a higher frequency of [?] naïve and younger phenotype of CAR T-cells that were CCR7 positive and CD45RA positive compared to new axi-cel products used in the ZUMA-1 study evaluating this product in third line and beyond. This was associated with a greater expansion of the CAR T-cells in these patients compared to the ZUMA-1 study.

So, in summary, in the ZUMA-12 study where we evaluated axi-cel as part of first-line therapy, axi-cel was found to be safe and it demonstrated substantial clinical benefit in patients with an unmet medical need. The high overall response rate of 85% and CR rate was 74% with 70% of the patients had ongoing response after a median follow up of 9.3 months. The higher frequency of the naïve phenotype of the CAR T-cells in the B infusion product was associated with a greater expansion of CAR T-cells, suggesting improved T-cell fitness in first line treatment.

What does the future look like for this research?

This is the first study evaluating CAR T-cell therapy in first line therapy. While this is an interim analysis and further follow-up is necessary, these early results indicate that CAR T-cell therapy can be highly effective, even in very high risk large B-cell lymphoma. If long-term durability of these responses is confirmed and this efficacy could be demonstrated in a much larger study, this could potentially change how we manage patients with large B-cell lymphoma at initial diagnosis in the future. 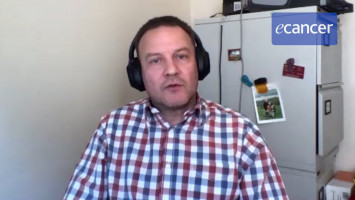