Prof Fabrice Barlesi speaks to ecancer about the ESMO 2020 virtual congress concerning a first analysis of the PIONeeR study.

Prof Barlesi outlines the aims of the trial, to understand these PD1 inhibitors. He explains what the trial found, and what this means for the future of NSCLC treatment.


Hi everyone, I’m Fabrice Barlesi from the Gustave Roussy cancer campus in Paris and ex-Marseilles University. This year at the ESMO meeting we presented the preliminary results of the PIONeeR project, a project looking at the understanding of the PD-L1 resistances in advanced non-small cell lung cancer patients treated with PD-1 or PD-L1 inhibitors.

The goal of this study was to try to understand the mechanism linked to the presence of a response or resistance to PD-1 inhibitors and the patients provided archived tissue before starting the treatment and were all re-biopsied at six weeks of treatment.

Regarding the factors associated with the probability of response and survival, the classical clinical factors were shown to be present but, interestingly, when we look at the PD-L1 expression the PD-L1 cell density in the whole tumour was better correlated to the probability of progression free survival and overall survival. At six weeks of treatment there was an increase in all the T-cell populations but especially the population with the PD-L1 and CD8 T-cell population.

This study is providing the first insight on the potential biological factors associated with a probability of response or resistance in patients treated with immunotherapy. 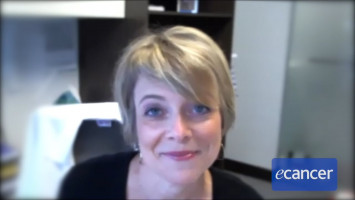