Prof Jesús San Miguel speaks to ecancer in an online interview for the virtual EHA 2020 meeting.

The outcome of triple class refractory myeloma patients, those who have failed proteasome inhibitors, immunomodulatory drugs and CD38, is very poor with median progression free survival of approximately 3-4 months. Therefore, we need new targets for these patients and one of these is the BCMA antigen. Here we are going to discuss about ide-cel, a BCMA directed CAR T-cell therapy, that has been tested in a phase I with 33 patients and showed very promising results.

Regarding the safety profile, treatment was really well tolerated. CRS grade 3 and neurotoxicity were observed in less than 6% of the patients at the maximum dose of 450 million. Two-thirds of the patients required tocilizumab, 22% of the patients required corticosteroids. The most common side effect was neutropenia and thrombocytopenia that required between 2-3 months to recover. Only five deaths were observed within the first period of treatment and two of them were attributed to myeloma progression and only one to CRS.

Therefore we can say in summary that we have now a new standard of care for myeloma patients triple refractory that can benefit from a CAR T that is associated with a good safety profile and high efficacy. More than 80% of the patients would respond, a high proportion of these patients will achieve a complete response; complete response is associated with over 20 months progression free survival. Therefore I think we can congratulate all doctors and patients and families for this new opportunity. 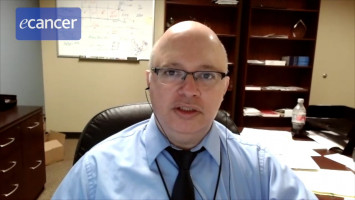