Dr Sara Lonardi speaks to ecancer about the results of the phase II PANDA study, which she presented at the ASCO 2020 virtual meeting and assessed the combination of first-line FOLFOX plus panitumumab versus 5FU and panitumumab in elderly patients with RAS-BRAF wild-type (WT) metastatic colorectal cancer.

She states that the standard recommended treatment for these patients is FOLFOX/LV monotherapy, but there have been no randomised trials investigating the addition of anti-EGFR monoclonal antibody.

Dr Lonardi outlines the design and results of the trial, which met its primary endpoint in both treatment arms.

However, she mentions the group are awaiting mature overall survival data and is conducting further translational analyses using tissue and blood samples.

The PANDA study is a phase II study with a pick the winner design that we launched to try to investigate the use of the monotherapy with 5-fluorouracil with panitumumab in elderly patients with RAS and BRAF wildtype tumours. All of us know that the doublet plus an anti-EGFR is the standard treatment in first line RAS and BRAF wildtype tumours but we do not know if, in the elderly population that is more fragile, more frail, compared to the general population to use a doublet gives something more than monotherapy with fluorouracil. So we designed this phase II non-comparative trial to look at the activity of the monotherapy in this specific population.

The primary endpoint of our trial was progression free survival and every arm, this is not a comparative trial, so we have two arms and every arm had a specific primary endpoint of reaching a PFS of 9.5 months compared to a null hypothesis of PFS of 6 months. So every arm had to reach this primary endpoint. Both the arms met the primary endpoint with a p, according to the Buchmeier [?] test of 0.001, less than 0.001. Also in the monotherapy arm we had a good PFS, a median PFS, of 9.1 months. It was statistically significant according to the test that was in the statistical design, the Buchmeier [?] test. Obviously the monotherapy arm had a lower toxicity. We do not see any neurotoxicity that is related to oxaliplatin, obviously, but also we had less general toxicity in the monotherapy arm as it was expectable, obviously.
So we think that even if it was not a comparative trial and we cannot say according to a phase II that the monotherapy is equal to the doublet when associated to panitumumab. We cannot say this because this is only a phase II trial. To have high evidence of this equivalence we should have a non-inferiority phase III trial. However, we believe that some signals are clear and that we have a useful message for clinical practice from the PANDA trial. This useful message is that if the patient experiences, if the elderly patient experiences, some toxicity you can drop off oxaliplatin without losing too much in terms of efficacy. If you have a frail patient, elderly frail patient, that you believe that from the clinical point of view they are not adequate to receive a doublet combination plus an anti-EGFR you can give them the monotherapy plus anti-EGFR and have a good efficacy without losing too much in terms of PFS.

We are still waiting for the overall survival results because the cohorts are still really immature and so we have to wait. We are also having some translational insights on all the tissue samples we collected during the trial.

We are talking about that but we have to consider that a non-inferiority phase III trial will need a lot of patients and a lot of time. All these drugs are already commercial drugs and so there is no interest from the companies to run a trial like that. This is an academic, pure setting and a difficult population because elderly and molecularly selected, so a doubly difficult selection eligibility criteria. So to have a phase III with hundreds of patients is not so easy and fast to run.
We are trying to understand how to be really… I don’t know how to say it in English… really correct from the methodological point of view without having too much patients to be enrolled.

What was the eligibility criteria for the frail population?

You know that the age is not the only criteria in elderly patients, we have to consider also the performance status. In the PANDA trial we did not want to deny elderly fit patients to receive a doublet and also maybe a triplet chemotherapy combination. So in the PANDA trial we selected patients between 70 and 75 years old only if PS 1 or 2. Because if the PS was 0 in the years between 70 and 75 we believe that they had to receive a doublet or triplet combination. So we did not want to have the 50% probability to give them a potentially inadequate treatment. Then for patients over 75 years the PS should be 0 or 1.

I want to only say that for a lot of years we have read articles saying that it is not possible to run a prospective trial in the elderly. In the past there were a lot of trials prematurely stopped due to a low enrolment of elderly patients. Our trial enrolled very fast and in Italy there is a high sensibility to the treatment of elderly patients. So I believe that our small trial is a good demonstration that all elderly people can participate to a clinical trial and that we can have evidence based data also in this population.

26 Jun 2020
COVID-19 and breast cancer: How should we treat our patients?
Dr Javier Cortés - IOB Institute of Oncology, Madrid and Barcelona, Spain 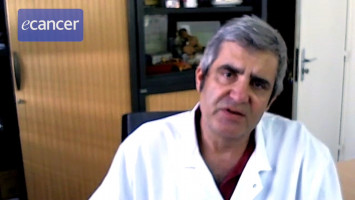 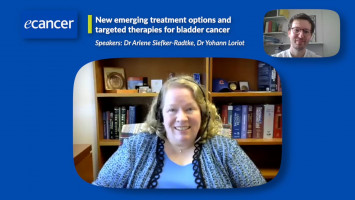