Dr Shaji Kumar speaks to ecancer about the results of the ENDURANCE trial that were presented at the ASCO 2020 Virtual Meeting.

Dr Kumar reports that while KRd was found to be effective for initial therapy there was no advantage to using it over VRd, which remains the current standard of care for these patients.

The ENDURANCE trial is a phase III trial that was designed to ask the question if carfilzomib lenalidomide dexamethasone combination is better than the current standard of care that is bortezomib lenalidomide and dexamethasone for newly diagnosed myeloma. The trial was designed just to ask that question in patients who either are not eligible to go to a stem cell transplant or were planning on deferring their stem cell transplant to the time of their first disease progression. We specifically looked at patients who did not have high risk features to complement an ongoing phase III trial that was specifically looking at high risk patients in the same setting.

The study was designed to ask two different questions, it was a randomised trial. The first question to be addressed was the comparison between the two different induction therapies in terms of their progression free survival. The study also had a second co-primary endpoint that is to look at the impact of duration of lenalidomide maintenance given after induction therapy. So patients who completed the induction therapy were randomised a second time to receive lenalidomide maintenance, either for two years or until disease progression, continuously. The focus of the current presentation at ASCO which represents the first analysis or the analysis for the first endpoint which is the progression free survival following the two different induction therapies.

The trial included only patients with newly diagnosed multiple myeloma who had received no more than one cycle of therapy but did not have any proteasome inhibitors or immunomodulatory drugs as part of that one cycle. Also patients who did not have any high risk features like translocation 14;16 or 14;20 or deletion 17p or an LDH that was significantly elevated, more than two times the upper limit of normal, or patients with plasma cell leukaemia.

The second interim analysis when we met 75% of the anticipated progression events demonstrated that there was no difference in the progression free survival between carfilzomib lenalidomide dexamethasone and bortezomib lenalidomide dexamethasone, two important proteasome inhibitor IMiD triplets that we use for initial therapy of multiple myeloma. With both the regimens the median progression free survival was approximately 34 months from the time of induction therapy.

We did notice that there was a higher rate of deeper responses, like very good partial response, in the carfilzomib lenalidomide dexamethasone even though the overall response rate was identical for both the arms. However, this improved depth of response did not translate to an improvement in the progression free survival in this phase III trial which we think is likely related to the more severe toxicities that we observed in the carfilzomib lenalidomide dexamethasone arm. Overall, about 43% of the patients in the bortezomib arm and about 61% of patients in the carfilzomib arm completed the intended number of cycles of induction therapy. The majority of patients who went off study before completing the induction therapy did so because of adverse events or patient refusal to continue with the induction therapy.

All patients have already been randomised who completed the induction therapy. Approximately 530 patients have been randomised to either indefinite lenalidomide or two years of lenalidomide maintenance. They will continue on therapy and will continue to be followed for overall survival events. We hope that we will have the results of that second randomisation in the next couple of years. 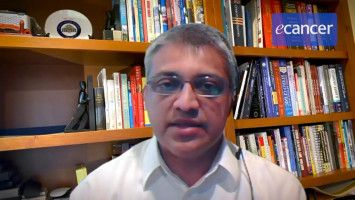