Pembrolizumab plus chemotherapy for patients with metastatic triple-negative breast cancer

Dr Javier Cortés speaks to ecancer online about the KEYNOTE-355 trial he presented at the virtual ASCO 2020 meeting.

The KEYNOTE-355 trial investigates pembrolizumab in combination with chemotherapy as first-line treatment in patients with metastatic triple-negative breast cancer (mTNBC).

Dr Cortés explains the results and how the continues to evolve.

We don’t know if checkpoint inhibitors in triple-negative breast cancer have shown anti-tumoural activity so the objective of this new study, which is KEYNOTE-355, is a randomised, placebo-controlled, randomised phase III study. Patients with first line triple-negative breast cancer were randomised to receive chemotherapy and the chemotherapy backbone included different chemo strategies – paclitaxel, nab-paclitaxel or carbo-gem which are widely used in clinical practice – with pembrolizumab or with placebo. The objectives were progression free survival and overall survival basically in PD-L1 positive tumours.

The most important findings of this analysis were, first, the progression free survival in PD-L1 with a CPS score of equal or more than 10, which means that clearly positive for PD-L1 in about 38% of the total population, did have an important improvement in progression survival. The median PFS moved from 5.6 to 9.7 months, hazard ratio 0.65. In PD-L1 one or higher it was 0.74 but the p-value did not reach the pre-specified criteria for positivity. Then pembrolizumab improved clinically and statistically important improvement, for patients with CPS ten or more. The toxicity profile was as expected and no new efficacy signals were observed. Finally, other efficacy endpoints, basically overall survival, will be presented when we have the events.

What are the next steps for the study?

How long until we see this in clinical practice?

This clearly depends on the regulatory authorities. In my opinion this data should be considered to be approved because one of the co-primary endpoints were clearly achieved with that very important hazard ratio and a very significant improvement in median progression free survival. So I think that these data should be considered for approval and I think that it is going to be considered for approval. But, of course, also for clinicians it will be very, very interesting to see the overall survival data, to be very confident about the use of this drug in clinical practice.

I think the other important data we have is the IMpassion130 which is a very similar clinical trial design with atezolizumab. Only with nab-paclitaxel in that study, remember that here we included nab-paclitaxel or paclitaxel or carbo-gem. The benefit in terms of hazard ratio was very similar for the PD-L1 positive patients but if we are looking at just a median progression free survival improvement the median improvement was very, very nice with pembrolizumab and compared very favourably compared with the atezolizumab study.

18 Jun 2021
The use of PARP inhibitors in oncology from a palliative care perspective
Judy Knudson, PA-C - University of Colorado, Denver, USA 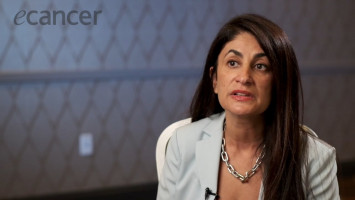