Published: 29 Mar 2011
Views: 7479
Rating:
Save
Prof Peter Hillmen - St James's University Hospital, Leeds, UK
Prof Peter Hillmen speaks about the treatment options available for elderly chronic lymphocytic leukaemia (CLL). The current standard of care is chlorambucil but patients can achieve a deeper remission if treated with FCR (fludarabine, cyclophosphamide and rituximab). Patients may only receive FCR if they have reasonably good renal function and the FCR drug combination is highly immunosuppressive, making it unsuitable for patients with a high risk of infections.
Prof Hillmen discusses how clinicians should decide on the best treatment for each individual, outlines the need for large randomised trials of new drugs such as bendamustine and talks about the prospect of targeted therapies.

Well chronic lymphocytic leukaemia, which is the commonest of the leukaemias, is a disease of the elderly. The median age of diagnosis is 72 and some of those patients may never need treatment so the median age of first treatment is in the mid-70s. All of our trials, historically, have been in younger patients with ages in their low 60s. We’ve now moved the therapy for younger patients on with combination chemotherapies, FCR being the standard, where we’re now improving survival for patients who are younger. But the majority of patients really can’t tolerate that intensity of treatment, so we’re now designing trials to look at the elderly and see what the most appropriate treatment is for people either elderly or unfit.

And some patients don’t need treatment and these days there’s a bit of a change because you don’t always diagnose the disease when it’s symptomatic.

Yes, historically in the ‘70s, most of the patients presented in stage B or C disease, basically with symptomatic lymphadenopathy or symptoms requiring therapy. Whereas now, about 80% of patients are found incidentally on the blood count when they go to their regular doctor’s check, and many of those patients won’t go on to need treatment. So that creates an issue of learning about a disease that you’re not going to be treating for now or perhaps ever, and all the emotional issues of the diagnosis of a leukaemia.

You’ve got a new treatment, FCR, but chlorambucil is still the standard of care in many situations. Can you elaborate on what are the dilemmas as we look at older patients?

The issue with FCR, is that, first of all, it requires a reasonably good renal function to clear the drugs and it’s a very immune-suppressive therapy. So patients are at risk of having infections, and the older you get, the less well you tolerate serious infections. And patients can’t tolerate the treatment, say if they’ve got comorbidities and patients in the mid to high 70s, it’s very difficult then for them to tolerate that intensity of treatment. So chlorambucil is a treatment that we’ve used for many years in CLL and many patients respond to that therapy but very few achieve a complete remission, unlike FCR.

What are the dilemmas then facing the busy clinician?

What are the differences then, between treating a slightly younger patient and the elderly?

The main difference is in younger patients, or fitter patients I should say, age isn’t the only important factor, is that we are trying to achieve deep remissions, we are trying to achieve complete remissions in those patients. And with FCR, about half the patients achieve a complete remission, some of them with no detectable disease. And we know that those deep remissions predict for a longer time to the next treatment and improved survival. Whereas the chlorambucil, which is effective but not as effective, very rarely achieves those deep remissions, and therefore the advantages in survival are not seen.

Is there still the dilemma of whether to treat at all, or to give single agent chlorambucil?

For most patients there’s an issue of when to start treatment because patients who are asymptomatic don’t need treatment, and certainly for those who are part of a busy practice, it’s quite difficult to know when to initiate therapy. But most patients with CLL will tolerate some form of therapy, either chlorambucil or a more intensive treatment.

And can you fill me in on bendamustine?

Yes, bendamustine is an interesting drug. It’s been around in East Germany for many decades, but it’s only really seen the light of day outside of Germany over the last few years. It’s an alkylating agent, similar to chlorambucil, although has some structure a bit like the ??? so it’s a bit more complex than that. And the responses, certainly in low-grade lymphomas and, less evidence, but it seems in CLL, are better, or appear to be better, than chlorambucil. We just don’t have a large number of randomised controlled trials to prove where we should be using it, or what we should be combining it with.

The other issue, I think for the elderly, which is an issue for many patients, is chlorambucil is an oral therapy, it’s very simple to take whereas bendamustine is intravenous and therefore the patient has to attend the day unit. And monoclonal antibodies, which are the major advance in recent years in the treatment of CLL, of course they’re intravenous as well. So we’re moving, in the elderly, from an oral therapy outpatient base to more intensive intravenous therapy which some patients would prefer not to have.

Is there the hope that there could be other novel therapies, perhaps more directed therapies, molecular therapies, in the future?

Well I think that hope is really being realised. In the last twelve months there’s been some really exciting work looking at targeted therapies which are specific for CLL and the other indolent lymphomas, and the very early trials of those drugs have shown phenomenal response rates in very refractory patients. So I think if one’s being very optimistic, and I think we can be, in the next few years we may not actually be using chemotherapy at all for these diseases.

Obviously it is very difficult for cancer doctors, but this is the most common blood cancer. What are your guidelines and recommendations to clinicians; what should they make of all of these facts right now?

The key thing is first of all our old conventional criteria for treatment remain the same. We only treat people who are symptomatic, have bone marrow failure so most of the patients we should not treat initially. If we can treat a patient with FCR, regardless of their age, if they’re fit enough they should receive FCR when they need treatment because those patients will do better in terms of survival.

For the patients who aren’t fit, we really don’t have the gold standard yet. Chlorambucil is acceptable, but there are certainly combinations which, in trials, are looking interesting.

And finally, we know there is a small group of patients with CLL, particularly at initial presentation, who are biologically a bad risk, and don’t respond well to chemotherapy. They are the patients with 17p deletion and that’s about 7% of patients when we first treat them. And they should be taken out of the chemotherapy type trials, and treated with more specific, targeted treatments.

I think ideally they should be, and we don’t have in those rare sub-types of the disease, and in the elderly, the good evidence from randomised phase III trials. There’s a desperate need for evidence-based medicine in that way.

And finally, is there a note of hope in better treatment for older patients with CLL, do you think?

I think so, I think if you look at the evidence now that’s accumulating, the current therapies and the combinations of them are looking much more interesting and tolerable. And I think over the next three to five years, looking at what’s coming over the horizon, therapy is going to change dramatically in CLL, and that’s going to include all patients. Because these targeted therapies are much better tolerated than the more intensive chemotherapies.

Professor Peter Hillmen, it’s great to have you with us here on ecancer.tv 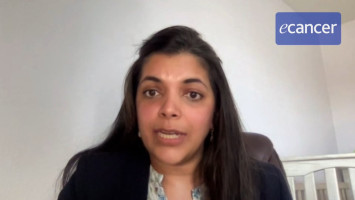