Dr Charlotte Pawlyn speaks to ecancer at the 2019 ASH meeting in Orlando on data from long-term follow up if the Myeloma XI trial which looked at the use of lenalidomide maintenance for transplant eligible and transplant ineligible newly diagnosed myeloma patients.

We’ve been presenting some updated analysis of the Myeloma XI trial, so the aspect of the trial we have updated the outcomes for is the transplant eligible pathway and looking at the randomisation between the thalidomide based triplet – cyclophosphamide, thalidomide and dexamethasone – or the same triplet but with lenalidomide, the newer generation IMiD drug. What we have shown is that patients who received the lenalidomide based triplet had improved progression free survival and overall survival compared to those patients who received thalidomide. What’s important is that this was consistent across all the different risk groups of patients, so whether patients had ultra-high risk disease or high risk disease they still had a benefit from the lenalidomide over the thalidomide combination.

One of the other things we looked at in the analysis that we’ve been presenting here at this meeting was trying to use our data to try and answer the question as to whether patients who undergo ongoing maintenance have a more aggressive relapse than those patients who don’t have maintenance therapy. To do this we looked at the time between biochemical progression for patients and the time point at which they required their next line of therapy. So usually the endpoint of the trial was the progression defined by the IMWG criteria and that’s biochemical progression, so based on an increase in paraprotein for example. But most patients don’t actually require therapy at that point and we collected the date at which patients started the subsequent line. So what we could look at was that time period between biochemical progression and starting the next line of therapy as a proxy for how aggressive the disease relapse was.

What was interesting was that we found that overall patients tended not to start the next line of therapy until about 6-8 months after their biochemical progression which is interesting information in terms of how we treat patients in the clinic. But what was important was that we didn’t see any difference in that length of time between patients who had received lenalidomide maintenance or those who had been under observation. That suggests that there’s no difference in the aggressiveness of relapse in those two different situations. 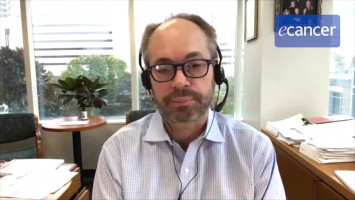