Azacitidine plus nivolumab in older adults with AML or MDS

Prof Hay says that AML and MDS are typically diseases of older people, yet these patients are poorly represented in clinical trials. This trial deliberately accrued older patients using broad enrolment criteria with the aim of improving outcomes in this patient population.

Prof Hay concludes by talking about the next steps for the remaining arms of the trial and the challenges associated with including this patient population in clinical trials.

Azacitidine plus nivolumab in older adults with AML or MDS

The S1612 clinical trial is here at ASH 2019 as a trials in progress abstract. The way this study initiated was really quite unique and exciting to be part of because it’s very well recognised that acute myeloid leukaemia and myelodysplasia are typically diseases of older people with the majority of the disease arising in patients over 60. But these individuals are poorly represented in clinical trials and they’re also really in need of improved outcomes, knowing how poor the outcomes can be for that population.

So very deliberately, leads from across North America, each of the cooperative groups treating adult patients got together to try and figure out and explore novel combination therapies that may improve outcomes. That included SWOG, the Canadian Cancer Trials Group, ECOG-ACRIN, Alliance and supported by the National Cancer Institute. One of the exciting combination therapies we really wanted to test was nivolumab and azacitidine. There is good reason to do so, to think it may be a combination that could help this population because azacitidine, we know, is fairly well tolerated in older people and really has changed things for the better but there’s more to be done. Also, in vitro work suggests that PD-1 may be implicated in myeloid malignancies. Also, a single centre, single arm trial conducted testing the combination of azacitidine and nivolumab in acute myeloid leukaemia looked really promising.

So, building on that, we designed a large randomised phase II/III clinical trial to be opened across the United States and Canada to deliberately enrol older patients to try and understand more about the illness in that population and hopefully improve outcomes. Eligibility criteria were deliberately broad because we wanted this to be a trial that the general population could access and results that would be generalizable to the wider cohort of individuals. That’s where some of the tension began.

The trial opened and accrued very well; from opening within eight months 78 patients accrued to the study, which was excellent. We were watching the results coming in very closely. We did become aware of a possible early toxicity signal after the 78th individual was enrolled where specifically there was a slight excess of early deaths in the experimental nivolumab and azacitidine arm when compared with the control azacitidine only arm. Now this did not reach statistical significance and, of course, with such small numbers it’s very hard to know how much to make of that. But we were concerned enough that we chose to halt accrual, to reconsider, propose slight eligibility changes recognising that maybe we’d been too liberal and we needed to narrow it a little and also help investigators. Because this trial opened in hundreds of centres across the country, including with physicians who maybe aren’t that experienced in PD-1 inhibitor therapy. So highlighting for investigators this is what you need to watch for because sometimes what may simply be sepsis in every other AML patient you see could be immune toxicity. You might think you’ve got pneumonia but just think could it be pneumonitis? You might think it’s chemotherapy induced diarrhoea but think could it be autoimmune colitis? Ensuring that people know to think about it and if they consider it’s a likely toxicity to start steroids quickly.

So what went on to happen, we have had a lot of interactions among the study team, all of these cooperative group leaders, the NCI and the FDA. Ultimately the decision has been made that the nivolumab and azacitidine arm will be removed from the S1612 clinical trial. But the study, we do plan to reopen it early next year with the remaining experimental arms, which is azacitidine and midostaurin, and decitabine and cytarabine. We do remain very interested in nivolumab and azacitidine, it still is a regimen of promise but we just need to approach it with caution and continue rigorous testing to be able to understand the toxicity, identify it, mitigate it and clearly identify the population in whom the risk benefit ratio is most likely to be favourable and improve outcomes. So that work is ongoing.

What are the current challenges when treating this patient population?

When an individual with acute myeloid leukaemia comes to your clinic as an older adult there are challenges. Certainly subcutaneous azacitidine is one of the very commonly used regimens, especially in Canada and other countries around the world. It is usually well tolerated but it can be quite inconvenient for patients because they have to have seven days administration of subcutaneous injection every month. That may change with new oral therapies coming out.
Alternatives would include subcutaneous cytarabine. Again, that can be associated with toxicity, including thrombocytopenia and there are all sorts of other options, including in the United States it’s starting to become more common to consider azacitidine and venetoclax therapy up front. I suspect we’re going to be hearing more emerging data about that.

Of course, some individuals are just so frail you need to have an honest discussion and lay out the risks and benefits, the likely prognosis and, for some, optimal supportive and palliative care is the appropriate choice.

What are the challenges associated with including this patient population in clinical trials?

Conducting clinical trials is always a challenge because you need to do it so well. You need to be really confident in the data you’re collecting because you want to be really confident in the data you’re putting out that people may then use to change practice. So there are multiple mechanisms in place to help support investigators running trials for which I am very, very grateful because it’s not a one-man job, there are whole teams of people behind us. But particularly in the elderly population while it’s super-important, and I am very passionate about being able to recruit them and understand their disease and help them, it does bring new challenges.

They are frail anyway, you often are taking into account maybe suboptimal renal or hepatic function and trying to decide the risk/benefit ratio there. Also often there are multiple coexisting illnesses. So when an additional adverse event occurs it can be challenging for an investigator or a clinical trial sponsor to accurately determine what the cause of that was. So extra attention to detail is needed in the elderly population. 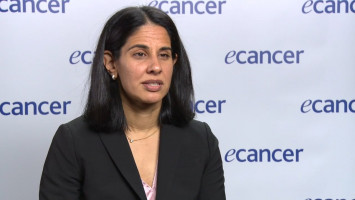