Prof Jeffrey S. Ross speaks to ecancer at ESMO 2019 in Barcelona about the challenging task of identifying carcinoma of unknown primary (CUP) according to ESMO guidelines.

He explains the background of the trial, which involves the use of DNA sequencing to guide a more personalised treatment for these patients.

Prof Ross outlines the design of the study, in which patients who met the ESMO guidelines for the diagnosis of CUP were screened with a DNA profiling test. This test would match patients to a treatment arm according to the molecular signatures of their tumour.

He states that over 30 percent of patients were matched to a treatment arm using immunotherapeutic or targeted agents, as opposed to the standard of care chemotherapy.

For the future, Prof Ross hopes that this new and innovative strategy will ultimately improve patient outcomes.

It’s kind of an interesting and somewhat prolonged background. It began in 2013 when I did a study of 200 patients with carcinoma of unknown primary to see whether or not this new DNA sequencing programme at Foundation Medicine might uncover unexpected cancer therapy targets based on what was available some six years ago. It ended up being published in the first issue of the new cancer journal, JAMA Oncology, volume 1, number 1, with three accompanying editorials that it was time to look at stopping the one size fits all general treatment of this syndrome of carcinoma of unknown primary and find ways to transfer it to a more personalised, individualised therapy. That led to the decision by Roche Pharmaceuticals to open a major trial in many countries but not North America, mostly in Europe, called the CUPISCO trial, a prospective randomised trial of patients who fulfilled the ESMO guidelines for the diagnosis of CUP and were thus eligible for this DNA profiling test called FoundationOne CDx and then learning whether or not their cancer type had markers that would put them matched to a treatment arm, nine different treatment arms that were using the modern era of targeted therapy plus the immunotherapy arm which did not exist when the first study was done way back when in 2013.

I decided then to see by using a retrospective cohort of a little more than 300 patients whether or not if we did the exact method of patient accrual for this CUPISCO trial whether we would have a low or a high frequency of patients matching to one of the treatment arms. I was surprised to find that well over 30% of the patients matched to a treatment arm in the trial, suggesting that at least a third of the patients are going to get an experimental or an innovative approach to their disease rather than the standard of care chemotherapy. Now as the trial progresses, 160 patients accrued so far with plans to hopefully reach 800 or more patients, we’ll see the impact of the personalisation on the survival of this previously very, very dismal prognosis. CUP is an enigmatic disease, the patients are somewhat pariahs because no-one knows where their cancer started from and their therapy doesn’t work when they get chemotherapy. Under 15% of the patients are alive after one year of chemotherapy; there’s great opportunity to improve that. It doesn’t seem that knowing where the primary is is as critical as knowing what the genomic drivers of the disease are, meaning that testing for therapy selection will outperform testing to try to search for the primary which may be futile in the end.

The standard of care for decades has been to try to find where the primary is or have a limited idea and try to use organ-specific chemotherapy. The ESMO guidelines actually divides the disease into good prognosis CUP and poor prognosis CUP. The good prognosis CUP means that the patient may live one to two years and the poor prognosis is the patient will unlikely live one year. So it doesn’t mean that there’s any really good outcome on chemotherapy but it’s the only treatment available at the current time. Mostly a platinum-based regimen if there’s a suspicion that it’s an upper body, upper GI type, one regimen lower, a different regimen but not much difference between those chemotherapy regimens and not much benefit for the patients.

The bar is low to go from a one size fits all to a personalised it shouldn’t have any trouble. I’m hoping to have a much better patient outcome in terms of progression free and overall survival. We’ll know fairly quickly because, unfortunately, so many events occur in the chemotherapy treated arm very quickly. So I hope it may be one to two years from now, here at the ESMO conference, we’ll be back to show what this meant in terms of improved patient outcome. 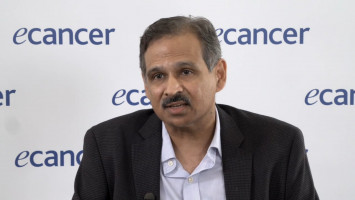