BEACON: Encorafenib plus cetuximab with or without binimetinib for BRAF V600E–mutant metastatic colorectal cancer

Prof Josep Tabernero speaks to ecancer at ESMO 2019 in Barcelona about the BEACON trial.

The trial used encorafenib plus cetuximab with or without binimetinib to treat metastatic colorectal cancer patients with a BRAF V600E mutation.

Prof Tabernero explains that the triplet combination was found to be most beneficial in terms of overall survival, overall response rate, depth of response, and quality of life with a manageable safety profile.

Basically, the BEACON trial was designed to find new treatment options in patients with metastatic colorectal cancer that bear the BRAF V600E mutation. We know that this accounts for between 8-10% of the patients with advanced disease and also we know from previous series that these patients actually have a poorer prognosis compared to the global metastatic colorectal cancer population.

The initial data suggested that as these patients had a BRAF mutation actually they could be sensitive to BRAF inhibitors like, for example, patients with melanoma. But actually with the initial data we realised that the activity was severely very low, almost non-existent. Then we tried to understand in the lab which were the mechanisms of immediate resistance to BRAF inhibitors and we realised that there was an immediate upregulation of the epidermal growth factor receptor, EGFR. So then we went back to the clinic and we decided to do the BEACON study. It’s a randomised study in patients with metastatic colorectal cancer that have been previously pre- treated and that bear the mutation V600E, BRAF V600E.

As initially expected with preclinical and early clinical data that we had, the triplet combination did much better than the control arm. So the hazard ratio for overall survival was 0.52, translating the median survival from 5.4 months in this poor risk population to 9.0 months for patients that received the experimental treatment.

Also, we looked at the data on the doublet and we compared the doublet with the control arm, although this was not one of the primary endpoints of the study. There was also benefit, slightly lower, with a hazard ratio of 0.63 and a median survival increasing from 5.4 to 8.4. But, more importantly, these patients are really very symptomatic when they have advanced disease and also we show an important advantage in the overall response rate. So the overall response rate for the triplet was 26% independently reviewed, for the doublet it was 20% and for the control arm it was only 2%. But, even more, in looking at the tumour shrinkage according to the waterfall plots, patients receiving the triplet treatment tended to benefit more than those that received the doublet treatment in terms of tumour shrinkage.

Also we looked at the safety, of course, and the quality of life. The quality of life was well maintained with the triplet and the doublet and with better outcomes compared to the control. The safety profile was very manageable. Actually, patients receiving the biological treatment, either the triplet or the doublet, didn’t have more side effects and especially grade 3 treatment related adverse events compared to the control arm. There were some toxicities that were especially devoted because of the mechanism of action of these compounds, so asthenia, fatigue, diarrhoea, this is a special characteristic of these kinase inhibitors. But, globally speaking, the toxicity profiles were really good and manageable.

What could the clinical impact of this be?

Well, for the first time in colorectal cancer a subgroup of patients that have a gene addiction with a BRAF V600E mutation have a treatment that can be considered a personalised treatment because actually it’s directed to abrogate this addiction with BRAF. So we think that for the first time we have personalised treatment in the field of precision treatment that it’s directed to one particular aberration. We had other predictive biomarkers before but most of them were negative predictive biomarkers like KRAS mutations, NRAS mutations. In this particular case the fact that these patients have an oncogene addiction to BRAF actually makes them sensitive to this triple combination inhibiting the EGFR-RAF pathway in a very vertical way. 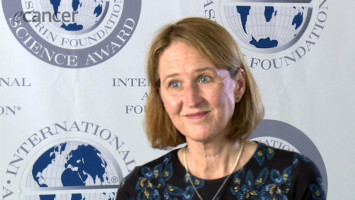 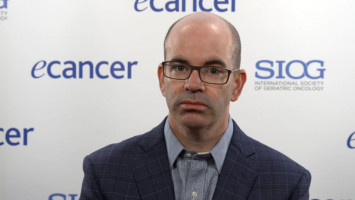