Prof Pieter Sonneveld speaks to ecancer at the 2019 International Myeloma Workshop meeting in Boston about results from the subgroup analysis of high risk patients in the CASSIOPEIA trial.

Prof Sonneveld explains that patients defined as 'high-risk' were those considered ISS stage 3 or having high-risk cytogenetics.

He reports that the stringent response and complete response of the high-risk patients was comparable to the standard group of patients.

Today I presented the results of the CASSIOPEIA trial. Some background: CASSIOPEIA is a trial in transplant eligible newly diagnosed myeloma patients that compares the standard of treatment, at least in Europe, that is VTD induction followed by autologous transplant followed by consolidation again with VTD followed by maintenance. That was compared in this trial prospectively with the same schedule plus daratumumab for induction and consolidation.

The CASSIOPEIA trail was a cooperative trial between the French IFM group and the Dutch-Belgian HOVEN group. It was performed as an independent trial. The main results were already published in The Lancet in June of this year but this time we presented a planned subgroup analysis for the high risk patients. What were the high risk patients in this trial? Those were defined as the patients having ISS3 or patients with high risk cytogenetics, being the (4,14) translocation and the deletion 17p or combinations of those.

At a median follow-up of 18 months we looked at the response rates, stringent CR, CR in these subgroups compared with the whole population in the study, the intention to treat population, and they were comparable. Stringent CR, CR plus stringent CR, and overall response rate were comparable between the standard risk and the high risk patients. More importantly, we also looked to the progression free survival since this was highly significant in favour of daratumumab in the total population. Again, for this subgroup with high risk disease we observed that also they have a benefit from adding daratumumab to VTD.

It’s only 18 months follow-up so we will need a longer follow-up time to view the complete results of this treatment. But our impression is that daratumumab VTD is certainly benefitting the high risk subgroup of patients.

Real-world evidence of the use of carfilzomib to refractory to lenalidomide pati...
Prof Evangelos Terpos - University of Athens, Athens, Greece 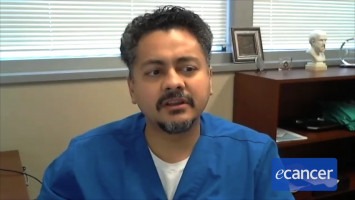