Dr Mark Litzow talks to ecancer at the European School of Haematology (ESH) meeting: International Conference on Acute Lymphoblastic Leukaemia about the occurrence of central nervous system leukaemia as a result of acute lymphoblastic leukaemia (ALL).

He describes the features of this type of leukaemia, the role of prophylaxis treatment and additional preventative measures that can be taken to reduce the risk of relapse in the CNS.

Dr Litzow also mentions various factors that clinicians must take into account when deciding on the most effective treatment for these patients.

One of the big challenges in acute lymphoblastic leukaemia is the risk of the patient relapsing in their central nervous system. In central nervous system leukaemia patients have infiltration of the lining around the brain, of the meninges, that can be a sanctuary site where chemotherapy doesn’t get into that area well. This is systemic chemotherapy that we give through the vein or by oral medication. So we know that if we don’t do prophylaxis and try to prevent this CNS occurrence of the leukaemia that this will happen in more than 50% of the patients.

Over the years there has been refinement in the treatment, in the prophylaxis or prevention of CNS leukaemia. This treatment is given in conjunction with the systemic chemotherapy that we give, again either intravenously and/or orally, to treat their bone marrow disease and other sites of the leukaemia. The prevention of CNS leukaemia has been based primarily on intrathecal chemotherapy. So we do spinal taps and we sample the cerebrospinal fluid to see if there’s any leukaemic involvement and then we inject chemotherapy. We can also use high doses of certain chemotherapy drugs like methotrexate or cytarabine that can cross into the CNS and help to treat that leukaemia. What we have found over the years is that combining intrathecal chemotherapy with high doses of these drugs like methotrexate and cytarabine can significantly reduce the risk of development of CNS leukaemia later in the course of the patient’s treatment.

Cranial irradiation, or sometimes radiation both to the cranium, to the head, and to the spine can also be effective in preventing the development of CNS leukaemia but is associated with more side effects. Particularly in children it can be associated with delay in mental development and even slowing of mental development. So in paediatrics they’ve largely moved away from using cranial irradiation and are relying on intrathecal therapy and also systemic therapy. For adults we’re also moving in that direction as well.

If someone, despite that, at relapse is in their cerebrospinal fluid or if we find at diagnosis that they have leukaemia in their spinal fluid then that presents additional challenges to us. We can frequently get that under control with the intrathecal chemotherapy and we sometimes also will add cranial irradiation. There’s some controversy about whether those patients are at higher risk for a poor outcome in the future and if they should have a transplant. Many of us think that a transplant should be considered for them. There’s things that we can do at the time of transplant to also try to reduce the risk of leukaemia coming back in the spinal fluid after the transplant – we’ll sometimes give some extra radiation to the brain, we call it a cranial boost, and then we often use total body irradiation as part of a conditioning regimen for transplant which also very effectively treats the CNS.

What do clinicians have to consider when deciding between treatment options? What guides their decision?

An important consideration is the patient’s age. We don’t like to use that by itself, we also take into account other factors such as comorbidities that the patient may have – if they have liver disease, if they’re diabetic, if they have heart disease. So those are also considerations. But for younger patients we think that a paediatric intensive regimen that I mentioned can be the most effective way to get them into remission and keep them there and may even prevent them from needing to have a transplant.

There are new immunotherapies that have been developed. Blinatumomab, a bispecific T-cell engaging antibody that brings a T-cell close to the leukaemic blast and can kill it, has been shown to be very effective in the relapsed setting in putting patients back into remission. It doesn’t tend to keep them there but it can serve as what we call a bridge to transplant and get them into remission so that we can then more safely take them to transplant. There are now studies going on in the United States and Europe to bring these immunotherapies into the up-front setting, so to combine them with chemotherapy to try to get deeper remissions, to get patients to a minimal residual negative disease state and so a better quality of remission. We think that these treatments will improve the number of patients that can get into remission and we think maybe even allow us to give less chemotherapy given how effective these treatments are.

One other one that’s important is a drug called inotuzumab ozogamicin which combines an antibody to CD22, which is expressed on most B-cell ALL blasts, and it’s linked to a chemotherapy drug. So it delivers a chemotherapy drug right to the blast. It’s also showing very high response rates and can be effective with chemotherapy.

The most exciting treatment in ALL is a chimeric antigen receptor T-cell to the CAR T-cells. Those are also highly effective in the relapsed refractory setting. We’re not as far along in how we’re going to bring those up to the up-front setting and use those with newly diagnosed patients but there’s going to be studies that eventually will look at that in that setting. Then our hope is that by getting more patients into remission and keeping them there we can lessen the need for transplant which is highly effective but also has a lot of short- and long-term side effects. 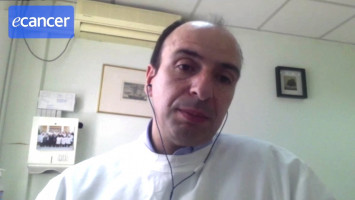 13 Jun 2020
COVID-19 and breast cancer: How should we treat our patients?
Dr Javier Cortés - IOB Institute of Oncology, Madrid and Barcelona, Spain