Updates from KEYNOTE 57: Pembrolizumab for patients with bladder cancer

Dr Arjun Balar speaks to ecancer at the 2019 ASCO Genitourinary Cancers Symposium about updated data from the KEYNOTE 57 trial.

They found that the complete response rate (CR) was 40% at 3 months and 53% of these were lasting 9 months or longer - showing durability for pembrolizumab.

The adverse events were manageable, and the KEYNOTE 676 will test a combination of pembrolizumab with BCG.

What I’ll be presenting on Friday morning at the ASCO Genitourinary Cancer Symposium 2019 is updated preliminary data from KEYNOTE 57. KEYNOTE 57 was a single arm phase II study that investigated pembrolizumab in high risk BCG unresponsive non-muscle invasive bladder cancer. In this particular study the focus of this trial was to focus on patients with high risk non-muscle invasive bladder cancer that were no longer responsive to BCG therapy. Specifically, the cohort that I will be presenting is the CIS cohort with or without papillary disease. In this trial we aimed to enrol approximately 130 patients. I will be presenting the updated data from 102 patients from this cohort.

What we found in this particular study was that the baseline characteristics of this group matched what we would typically see for patients with non-muscle invasive bladder cancer. The median age was just above 70, it was male predominant, again smokers predominantly in this population. What we also found out was that this patient population also reflected the BCG unresponsive group and, in fact, the median number of BCG installations in this group was twelve which suggests again that this was a patient population that was truly no longer responsive to BCG immunotherapy. Similarly, about two-thirds of patients had CIS alone; the remaining population had papillary disease which included T1 disease as well as Ta disease that coexisted along with CIS.

At a median follow-up of nearly 16 months what we found is that the complete response rate in the bladder at 3 months was 40%. Additionally, about 53% of these CRs are lasting nine months or longer, suggesting that there is durability for pembrolizumab in this patient population. The safety profile is also quite encouraging – approximately two-thirds of patients had some form of an adverse event but the rate of grade 3 and 4 adverse events was about 12-15% which overall suggests that this is a safety profile that is highly manageable. Only six patients actually discontinued treatment due to an adverse event and very few patients required corticosteroids to manage immune-related toxicities.

So what we see, as a summary from the data from this particular study, again this is an interim analysis so additional follow-up will certainly be necessary, is that the complete response rate at 3 months is 40% in BCG unresponsive high risk non-muscle invasive bladder cancer. The median duration of response is actually 12.7 months, suggesting that there is durability to the activity of pembrolizumab in this patient population which is quite encouraging.

There is a randomised phase III trial called KEYNOTE 676 which is testing pembrolizumab in combination with BCG versus BCG alone in patients who are refractory to the induction BCG and this will further test the role of pembrolizumab in patients with high-risk BCG unresponsive non-muscle invasive bladder cancer. 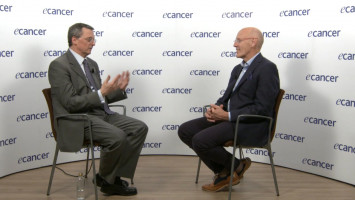