Ibrutinib with obinutuzumab in patients with chronic lymphocytic leukaemia

Dr Carolina Moreno Atanasio speaks to ecancer at ASH 2018 about updates of the iLLUMINATE trial, which uses ibrutinib in combination with obinutuzumab to treat patients with chronic lymphocytic leukaemia (CLL).

She reports that after 7 years of follow-up has shown remarkable efficacy and tolerability.

Ibrutinib is a BTK inhibitor which has been approved for patients with CLL. As single agent ibrutinib has shown remarkable efficacy and tolerability after seven years of follow-up. The preferred first treatment recommended by NCCN guidelines in older patients or those with comorbidities are either ibrutinib as single agent or the combination of chlorambucil plus obinutuzumab. We already know that patients with a mutated IGHV gene or those with high risk features do poorly after chemo-immunotherapy. So in the iLLUMINATE study what we investigated was whether the addition of an anti-CD20 monoclonal antibody, obinutuzumab, to ibrutinib will improve progression free survival compared to conventional chemo-immunotherapy, which is chlorambucil and obinutuzumab, as first line treatment. Additionally, we aimed to prospectively confirm whether the combination of ibrutinib plus obinutuzumab will be superior to the conventional chemo-immunotherapy in patients with high risk genomic features.

This is a randomised trial in which patients were eligible if they were previously untreated CLL and required therapy and they were older than 65 or younger than 65 if they had some comorbidities that precluded the use of fludarabine-based therapy. Patients were randomised to receive either ibrutinib given continuously in combination with obinutuzumab for six cycles compared to chlorambucil for six cycles in combination with obinutuzumab. In this study there was also a crossover – patients who progressed under chlorambucil obinutuzumab were allowed to crossover to single agent ibrutinib. So the primary endpoint of the study was the progression free survival, that means the median time from randomisation until disease progression or death occur assessed by an independent review committee.

The results are very promising and what we have seen in this population which is enriched for high risk genomic features is that the benefit of ibrutinib plus obinutuzumab is robust and significant and we have seen that the median progression free survival after 31 months has not been reached in the ibrutinib and obinutuzumab arm while the median progression free survival in the chlorambucil obinutuzumab arm, which is the conventional standard of care chemo-immunotherapy, was only 19 months. So with this combination we are able to reduce the risk of progression in around 77% of the patients and what is more important is that in a very high risk population the reduction in risk is around 85%. So that means that the magnitude of effect in progression free survival is observed in ibrutinib plus obinutuzumab across all subtypes of groups analysed in this CLL population included in the study. So far there have been 229 patients who were enrolled and randomised to receive either of these two arms that I have already mentioned. 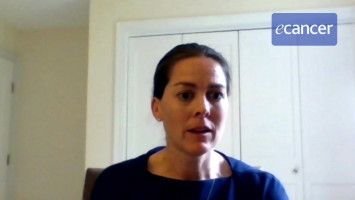