Prof Axel Hauschild speaks with ecancer at the EADO 2018 congress in Barcelona on whether it is possible to cure advanced metastatic melanoma patients.

Prof Hauschild explains that there is promising data for use of the PD-1 antibodies and also for the combination of ipilimumab and nivolumab.

He explains that for patients with a metastatic disease such as isolated systemic metastasis similar results or better can be achieved through surgery.

He believes that one of the remaining challenges is the development of a biomarker that is easier to use particularly on patients with a low tumour load.

I’m absolutely convinced we can cure metastatic patients. First of all, there’s a group of patients who were cured also ten years ago and this was roughly 10% of patients who had simply favourable prognostic signs which were solitary lung metastasis, for instance, and this was removed and the patients never relapsed. So there was a small proportion of patients. The question is what can systemic drugs do here and we have five year survival data from the PD-1 antibodies and the five year survival looks very promising because those who had a previous treatment and those who had no previous treatment if they are mixed up it’s 34% five year survival and for the treatment naïve patients it’s 41% after PD-1 antibody alone. There is even more promising data for the combo of ipilimumab and nivolumab so I would say yes, there is the likelihood very high that one third of the patients are already cured nowadays.

Are there any subsets who show a particularly favourable prognosis or who may prove a bigger challenge?

There are patients with favourable prognostic factors like stage, which is very important. M1a means that distant lymph node or skin metastasis, M1b is a patient with just lung metastasis; now, as before, this is the best of the best patients so if we give new drugs to them and particularly they have a complete response they are very likely to be cured. So that is patients who might not receive the drug forever so we can stop one day and discontinue and the patients still have an ongoing complete response.

Is there a significant difference between patients who can be completely cured and those who need to continue treatment?

Yes, absolutely. There is a gap in between patients with progression free survival and those who survive. The gap is anywhere between 13-20% and this is patients who still survive although they had a progressive disease so they are benefitting from any other salvage therapy which is second and third line treatment. For instance, you start with targeted therapies like BRAF and MEK inhibitors, patients become progressive and you give some sort of immuno-oncology drugs – a PD-1 antibody or ipilimumab and nivolumab – they have another success. So in the long run they are doing well but in the short run they were not counted as initial responders.

Would something like ongoing liquid biopsies and regular check-ups be part of ongoing care?

That’s a very good question. So far we’re trusting radiological evaluations, so imaging with CT and MRI scans or PET scans. You are right, I believe we need to have some biomarkers which are easy to use and circulating tumour DNA is one of the hottest topics in our day. But so far it looks like only patients can be detected with some sorts of circulating tumour DNA from specific mutations like BRAF mutations if they have a high tumour load. So those who have a rapidly progressive disease it’s easy to detect but those with just a tiny progressive disease are not so easy to detect. So the question is on sensitivity and specificity how good are these new markers and they are not routine yet.

Would you say that is one of the few remaining challenges?

Absolutely, absolutely, but we have made so much progress. In the last eight years the survival went up from 10% five year survival to 40% and now, I believe, it’s slowing down. It’s very unlikely that there is any breakthrough like immune checkpoint inhibition which brings the same magnitude of benefit. Coming from chemo to immune checkpoint inhibition was like blowing everything away which we have seen and it was leading, as you know, to the Nobel Prize. Something like this, to see again and bring another 30-40% improvement in overall survival, I believe it’s unlikely.

Not even a new agent in adjuvant or neoadjuvant setting?

It could be the neoadjuvant or the adjuvant setting which is making the difference but still this is patients who have a good chance for survival without any further treatment. So in all of the clinical trials the worst case is 70% risk of progressive disease and the best case, for stage 3a with just a tiny lymph node metastasis, it’s not more than 20% risk to relapse. So we have one risk to take into account in the future and this is over-treatment of potentially cured patients and bringing harm to these patients.

What would you say to other clinicians to encourage them to get to that milestone of a curative prospect?

We have a number of physicians who are interested in just cure and I believe it’s difficult to talk about the c word because you have always arguments against it. But we have patients who are cured; I was knowing these patients by name in the past because it was just so few but now I don’t know them by name and this is a good sign because there’s very many. 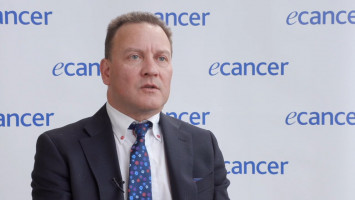