Dr Lisette Rozeman speaks with ecancer at ESMO 2018 in Munich about the study into a more tolerable dosing regiment of the combination of ipilimumab and nivolumab with the same efficacy in stage III melanoma.

Dr Rozeman explains that lowering the dose of the ipilimumab and running only two cycles reduced the number of patients receiving adverse events.

She states that the response rate was still preserved, with only a small difference between the first two arms.

In our previous OpACIN trial comparing adjuvant, so neoadjuvant, ipilimumab plus nivolumab we saw a very high response rate in the neoadjuvant arm. Furthermore, we observed in general in older patients a very high grade 3/4 toxicity rate of 90%. So therefore the aim of the current trial that was just presented at this ESMO was to identify a dosing regimen of the combination of ipilimumab and nivolumab that was better tolerable but had the same efficacy.

In this study patients with high risk stage III melanoma were included. They had to have at least one measurable lesion according to RECIST 1.1 and they all had lymph node metastases. This multicentre investigator initiated phase II trial randomised patients between three dosing regimens of the combination of ipilimumab and nivolumab. In arm A patients were treated with ipilimumab 3mg/kg plus nivolumab 1mg/kg, the standard dosing; in arm B it was with low dose ipilimumab, so ipilimumab 1mg/kg plus nivolumab 3mg/kg, in both arms it was given for two cycles. In the last arm patients were treated with a sequential scheme of the first two times ipilimumab 3mg/kg and then directly followed by two cycles of nivolumab 3mg/kg.

The primary endpoint of this trial was the grade 3/4 toxicity rate within the first twelve weeks. In arm A we observed that 40% of the patients developed one or more grade 3 or 4 adverse events; in arm B this was only 20% and in arm C this was 50%. This was much better than we observed in our previous trial and we think this is because we only gave two cycles now and we lowered the dose of the ipilimumab.

With this new information in mind, what is the planned expansion, follow up? What are your next steps?

When we look into all the patients we see that none of the patients that achieved a pathologic response have relapsed until now so this is very promising although the median follow up is still only eight months. We have to wait for the follow up data but we think that this candidate that was tested in arm B, which is ipilimumab 1mg/kg plus nivolumab 3mg/kg, is very attractive to test in a randomised phase III study compared to adjuvant anti-PD-1 therapy. 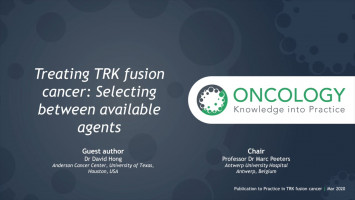