Prof Paolo Ascierto speaks with ecancer at ESMO 2018 in Munich about results from a phase 2 randomised study of dabrafenib and trametinib plus PD-L1 checkpoint therapy pembrolizumab for BRAFm advanced melanoma.

Prof Ascierto discusses how immuno-oncology is adding to melanoma treatment, with the dabrafenib trametinib combination already found effective in the adjuvant setting through the COMBI-AD trial.

The results, including the improved CR rate of 18% v 13% and median duration of response of 18.7mo v 12.5mo must be weighed against the increased toxicity profile, with 40% of patients discontinuing from the triplet therapy due to adverse events.

These results are also featured in the ESMO Melanoma round-up.

There is a lot of interest for the approach with combination targeted therapy, immunotherapy. Why is this? Because we have a treatment targeted therapy with a higher response rate and we have a treatment with immunotherapy with a lower response rate but durable response so if we can get a high response rate but with a holding response, durable response, of course, would be great and this, of course, for several reasons. Moreover, with BRAF and MEK inhibitors we can also activate the immune system so we can have also an immuno-mediated mechanism of action from this. So this can prepare the phase for checkpoint inhibitor action.

There were several phase I trials with three different triple combinations: with vemurafenib, cobimetinib, atezolizumab; dabrafenib, trametinib, spartalizumab and dabrafenib, trametinib, pembrolizumab. Last year here at ESMO we had the data from the phase I showing a 73% response rate, a duration of response of more than 19 months which is more than with targeted therapy alone without PD-1. The safety profile was interesting and toxic – 70% of any grade 3 and 4 adverse events and 40% of patients discontinued for toxicity but this was the phase I.

Now at ESMO we presented the data from the part 3 of KEYNOTE022 that is the randomised phase II study which compared dabrafenib, trametinib, pembrolizumab to dabrafenib, trametinib, placebo. So this is the first report of a randomised study for the triplet and in this trial we enrolled 120 patients, 60 per arm. It is important to consider the study design because the design was really ambitious if we look to the power for the progression free survival because we designed the trial considering to get a hazard ratio of 0.62 or less in order to get significance. So this was the design of the trial. That said, another important consideration was looking to the patients’ characteristics. In this trial we enrolled more patients with elevated LDH, which you know are the patients with a worse prognostic factor, it was 45% and 43% in the two arms. Considering in general in this kind of clinical trial this percentage is 34 toxicity, so it was high. And more, if you look, the M1c group was more than 80% in the triplet arm with pembrolizumab and 60% in the doublet arm with placebo. So more patients with visceral disease in the treatment, this is important.

But looking at response rates, similar. Interestingly a little bit more in the doublet arm with placebo than on the triplet but this can be explained, of course, with the number of patients enrolled is not so high. More complete response in the triplet – 19% versus 11%. It is interesting because if you look at the waterfall plot in the triplet we had a higher shrinkage of the tumour – more patients with more than 60% of shrinkage of the tumour compared with dabrafenib with placebo. If you look at the progression free survival it’s interesting. The median PFS was more than 16 months in the triplet, 10 months in the doublet so six months more with a hazard ratio of 0.66, 34% of risk reduction. If you look at the curves it’s interesting, you see that the curves are similar in the first six months and then start to be separated. So the response rate is similar but probably the action of pembrolizumab was important in order to increase the level of the progression free survival. Looking to the median duration of response it was still higher in the triplet, a median duration  of more than 18 months in the doublet trametinib/pembrolizumab and it was 12 months in the doublet trametinib. But because the statistical design was ambitious – a hazard ratio of less than 0.62 – so the study cannot be considered significant but, for sure, with an interesting progression free survival.

Overall survival – if you look at the overall survival curves the curves seem really similar, so a hazard ratio of 0.77 and not significant and the curves are pretty similar. But there are some considerations. The one year overall survival rate was 79% in the triplet, 73% in dabrafenib/trametinib with the placebo. 73% is exactly the one year overall survival of dabrafenib/trametinib in the previous study. 79% in the triplet is the highest one year overall survival rate reached in a clinical trial so it is interesting and probably we should look also with more follow-up because at the moment the median follow-up is 9 months, it’s not much, in order to see the tail of the curve because maybe with the combination we can get a more durable response. But there is another important consideration – if the two curves are similar, like they seem to be, and looking to the post-progression treatments more patients, 40% more patients, were treated with immunotherapy after progression with dabrafenib/trametinib. So what does it mean? This means that probably we can see a comparison between the combination versus sequencing so we can still reach a good outcome even with the sequence. But if you look at the Forest plot, if you look at it with the triplet we got more benefit in patients with elevated LDH and performance status of 1. Probably the triplet may be for the patients with bad disease, we’ll see, because an important consideration is safety.
The safety profile confirmed what we have seen in the phase I. The impact of grade 3 and 4 adverse event treatment related is 53%, 40% of patients discontinued treatment so toxicity may be a problem, one that was registered in the treatment for pneumonitis and, if you look at the safety profile liver toxicity and pneumonitis were the causes of discontinuation for treatment. So, again, these two side effects may be tricky.

So, in conclusion, for sure the triplet showed interesting results, probably not be for all comers, probably could be in the future for the patients with bad disease – brain mets, elevated LDH and high tumour burden – we’ll see. But, for sure, I can comment also on some data that yesterday we have seen with the IMPemBra study, that is the Dutch trial with a sequencing approach with pembrolizumab, dabrafenib, trametinib. So with pembrolizumab, dabrafenib, trametinib given sequentially the IMPemBra showed the same response rate with less toxicity. So this may be in the future something that we can consider if we want to give the triplet for all comers. 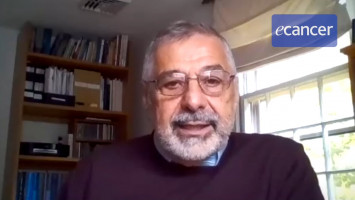