Unexpected role for Immuno-oncology in SCCOHT

Dr Levine speaks with ecancer at BCGS 2018 about small cell carcinoma of the ovary - hypercalcemic type, a rare disease with low trial support.

He discusses the discovery of a single gene responsible for the disease, and how this is impacting the development of treatment with immune agents and cell-cycle regulators.

We had a symposium today on small cell carcinoma of the ovary hypercalcemic type. It was an international symposium of all people around the world who study this disease. It’s a cancer that’s very, very rare and it affects young women and young adults and it’s very aggressive. A number of years ago myself and a few other groups discovered the gene that causes the cancer, it’s a gene called SMARCA4. We’re now developing some therapeutic options to help treat this cancer which is otherwise quite difficult to treat.

What options are being developed?

Other treatments that are being worked on are treatments that affect the cell cycle and some folks from McGill presented some very interesting data on using palbociclib, which is a CDK4/6 inhibitor. Other people are working on epigenetic regulators to treat this cancer.

Are you suing immunotherapies that have had success in other areas?

We’re using the standard immunotherapies – pembrolizumab, nivolumab. We’re also trying to get a clinical trial working and we’re going to be talking to multiple companies because Merck and BMS have not decided to support this trial because it’s a very rare tumour and it’s always hard to do rare tumour research because you can never really say ahead of time that we’re absolutely going to get hundreds of patients on the study when there are only hundreds of patients around the world who get this very rare cancer. So we’re trying to develop a phase II trial to study immunotherapy in this disease. 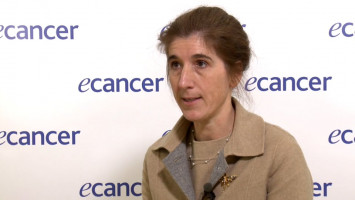