Dr Gulley speaks with ecancer at the 2018 American Society of Clinical Oncology (ASCO) Annual Meeting about the results of the PROSPECT study.

PROSPECT failed to confirm an overall survival benefit observed in a prior phase II study. He highlights the potential to combine with other checkpoint inhibitors in future trials, based on immune infiltrate data.

PROSTVAC or PSA-TRICOM is a pox viral vaccine that is designed to generate an immune response against cells making PSA.

It has in the pox viral vector the entire gene for PSA as well as the genes for three different human T-cell costimulatory molecules.

These can be grown up in large quantities in these pox viral vectors, frozen, and then simply removed out of the freezer, thawed and injected into patients.

What we did was initial safety studies and dose escalation studies and we found that this was safe to give in men with advanced prostate cancer and it could lead to good immune responses.

In a randomised phase II study that was published about eight years ago there was a suggestion of an improvement in overall survival with a median improvement in survival of about 8 months and a 44% reduction in the risk of death.

This led to a randomised phase III study in which patients with metastatic castration resistant prostate cancer who had no symptoms or minimal symptoms were randomised to receive vaccine alone, vaccine with GM-CSF or MP vector placebo.

What we found was that the overall survival, which was the primary endpoint of the study, and the vaccine was given over five months and then patients could get any other treatment after that.

They were followed for at least two years to capture all of those subsequent treatments.

What we found was there was no improvement in overall survival in men getting PROSTVAC compared with placebo.

We did see, though, that the overall survival was between 34 and 35 months so this was much longer than predicted when the trial was designed.

In addition, when the trial was designed there were not approvals of multiple agents that are now approved.

The only agent that was shown to improve survival that was approved at that time was docetaxel.

But it has also been previously shown that progression free survival was not a good discriminator for vaccines.

So what we looked at next was, okay, there’s no clinical activity in this patient population with vaccine alone, but is there any biologic activity?

We have hints of that from two other studies that we presented at the American Society of Clinical Oncology meetings here.

First I want to mention a study that we did in the neoadjuvant setting with PROSTVAC where we gave the vaccine subcutaneously and then looked at the before biopsy compared with the prostatectomy afterwards.

What we also looked at then, in another poster we presented the initial data on combining vaccine with immune checkpoint inhibitor.

So you can get activated T-cells making gamma interferon that can cause upregulation of PD-L1, for instance.

This can send an off-signal to the T-cells, shutting them down.

So potentially one could combine vaccine with an immune checkpoint inhibitor and get a better response.

We looked at this in patients with metastatic castration resistant prostate cancer where we combined vaccine with nivolumab.

The first two patients also got ipilimumab but we discontinued that because of the toxicities.

What we saw was that there were two exceptional responders among these patients suggesting that the combination of vaccine with checkpoint inhibitor could be effective in these patients.

Further data is needed to confirm this, however.

So we do have an ongoing study that is being presented at the American Society of Clinical Oncology in a trials in progress poster and that trial is combining vaccine with immune checkpoint inhibitor that targets PD-L1 as well as TGF-β and also looking at the addition of IL-15 to increase the number and activity of the NK cells and T-cells as well as epacadostat. 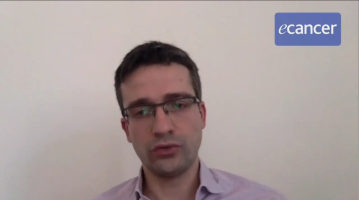