He describes how, compared to those receiving the current standard of care, trial participants had improved median DFS and OS.

For more on these findings, watch his presentation of the results at a press session, or read news coverage here.

We presented a study in patients with resected pancreatic cancer.

It’s a co-operative trial between the PRODIGE group in France and the CCTG Canadian Research Group.

We have included 493 patients with resected pancreatic cancer and we compared the standard of care, gemcitabine for six months, to modified FOLFIRINOX for also six months.

We performed an intent to treat analysis after the inclusion of 493 patients.

This translated to a large difference in median survival which was 35 months in the gemcitabine group and 54.4 months in the FOLFIRINOX group.

The benefit for FOLFIRINOX was seen in all subgroups and for all endpoints so FOLFIRINOX should be a new option and probably a standard of care in patients with resected pancreatic cancer and good performance status. 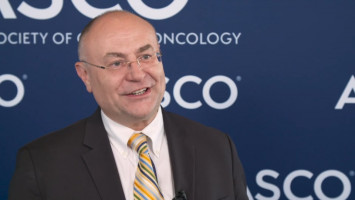