Dr Kieran speaks with ecancer at the 2018 American Society of Clinical Oncology (ASCO) Annual Meeting in Chicago about results from a phase I/IIa study of dabrafenib in paediatric patients with V600 BRAF mutations in relapsed/refractory low grade glioma.

He outlines the staging of the trial, from dose determination in the phase I setting to subsequent treatment, noting variability in patients ± 12 years old.

Dr Kieran describes the limitation and even shrinkage of patients tumours as highly encouraging, with limited toxicity beyond skin irritation as a BRAF associated toxicity.

The trial was first just to determine the dose of the drug in children, particularly those with brain tumours, so that’s the phase I part, the dose determination.

We actually discovered that older patients need a slightly different dose than some of the younger children, so it accounts for that variability under and over the age of 12.

Then once the dose was determined, as well as the tolerability of the drug, we went into the phase II part.

The phase II part was divided into a number of diseases for which they’re known to have some patients with this specific mutation and each cohort was treated separately and the presentation was on this specific cohort of children with paediatric low grade gliomas with the BRAF V600E mutation.

That’s important because that’s not the most common mutation in these tumours; they have another mutation for which this drug would actually be contraindicated by virtue of some complex biology probably not worth discussing now.

The tolerability of the drug was actually excellent and no different from all of the other patient populations that we had tested it in.

There are a number of things like some skin rashes, again BRAF is commonly found in the skin so it’s not surprising that people have rashes, erythema, itchiness, those kinds of things.

There were a few other toxicities, including some potentially rare ones, but again overall the drug is very well tolerated and fortunately patients could continue on the drug. Very few patients needed to stop the drug.

Every once in a while patients needed a little bit of a break but that would be expected in these kinds of trials.

There were a couple of severe adverse events, again easily manageable, you just stop the drug.

In fact, the only significant event was one patient just had an allergic reaction to the drug.

Obviously you can get an allergic reaction with any drug, it’s not drug-specific, but obviously that’s a patient that, by definition, needed to discontinue the drug. In fact, the patient only ever took one pill.

The response rate was the really exciting part of the trial.

Depending on how you measure response, both in terms of shrinkage but for paediatric low grade gliomas just stoppage of growth is the standard.

When you look at the patients that were coming on the trial that had received either chemotherapy, radiation or other therapy, in fact the majority of them the best other treatments can do is just stop the tumours from progressing.

Even then they eventually start to progress, in fact that’s how patients came on to this trial.

The really exciting part of this trial is that there was a very significant reduction in tumour in a high proportion of the patients, those that were evaluable over 50%, and even for those that didn’t have dramatic shrinkage had complete arrest of growth that was maintainable for a very long period of time.

So really the two kinds of endpoints that we wanted to see in the trial.

Very encouraging results, in fact, the results are so encouraging that there’s now discussion about instead of waiting for patients to relapse after radiation and chemotherapy, is for those that have these specific mutations is moving these combinations right in to up-front therapy.

The promise of personalised and targeted medicine is not to put you through the really toxic stuff but if we know the mutation, we have a drug against that mutation, is give it to you right off the bat and try and get early control without all the cumulative toxicities that radiation and chemotherapy induce in these children.

Again, the critical part of low-grade gliomas, unlike most tumours, almost all patients will survive, it’s just how much damage you have to do to them before they survive.

If we can get rid of some of that really toxic stuff early on that can have a huge impact.

Paediatric low grade gliomas are the most common tumour in children of the brain and so we’re talking about a big chunk of everything we do in paediatric neuro-oncology.

I imagine someone’s looking at putting together a trial to test that fairly soon?

The development of that is already underway on both sides of the Atlantic.

These would be international trials to really move this forward quickly so that the kids can benefit as quickly as possible. 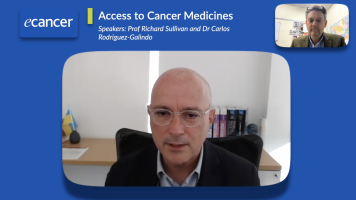