Early results from a 3rd gen EGFR-TKI in advanced NSCLC

Dr Cho speaks with ecancer at the 2018 American Society of Clinical Oncology (ASCO) Annual Meeting about a phase I/II trial of lazertinib, a highly selective and irreversible investigational 3rd-generation EGFR-TKI.

He describes the activity of lazertinib in targeting EGFR mutations and T790M mutation, while sparing wild type, and that the drug penetrates the blood-brain barrier (BBB) which has led to marked response in brain metastases.

Across all evaluable patients, the overall response rate was 64%, and Dr Cho outlines further trial expansion and evaluation which will confirm any survival benefit.

Lazertinib is an oral irreversible third gen EGFR-TKI highly selective for both activating EGFR mutations and T790M [?? 0:12] mutation. We conducted a phase I/II study in patients with EGFR mutation progressing on prior EGFR tyrosine kinase inhibitors. Some patients had brain metastases and we had a dose escalation part as well as a dose expansion part.

In terms of the brain metastases, the ability of lazertinib to cross the blood-brain barrier would be useful here then?

Yes. Lazertinib is a very active drug in our phase I/II study. The response rate was 66% across all dose levels and, in particular, the response rate was 86% at 240mg once daily dose at which we further developed this drug. For intracranial response rate it was 55% in EGFR mutant non-small cell lung cancer progressing on prior EGFR tyrosine kinase inhibitors. In preclinical studies we also demonstrated a very potent BBB penetrating activity of lazertinib compared to other EGFR tyrosine kinase inhibitors including osimertinib.

Looking at all of the response rates, how does that look like it might translate into tangible patient benefit?

Response rate especially in T790M positive non-small cell lung cancer at 240mg once daily dose was 86%. It seems numerically higher than any other EGFR tyrosine kinase inhibitor reported so far so we believe that this high objective response rate in this population will be translated into overall survival benefit and this benefit will be confirmed in a future randomised phase III study.

Any plans for incorporating the broader patient cohort in that phase III study to go above and beyond in that way? 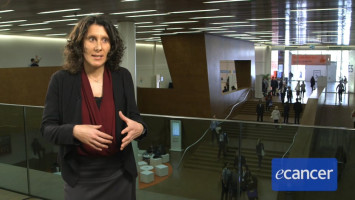