What will we expect from novel therapies for oesophageal and gastric malignancies?

Dr De Mello speaks with ecancer at 2018 American Society of Clinical Oncology (ASCO) Annual Meeting about the changing landscape of care and treatment for oesophageal and upper gastric cancers.

He highlights the impact of immuno-oncology seen in gastric cancers, as in many other sites, and the identification of biomarkers to guide targeted therapies.

Among these, Dr De Mello notes the failure of combining ATM targeted therapy and olaparib in a phase III trial, the promising prospect of Tumour Mutational Burden as a prognostic marker, and that management of gastric/oesophageal malignancies is increasingly important in many parts of the world.

In this ASCO meeting we organised a very interesting educational session that was emerging therapies for upper gastrointestinal malignancies. This session was very interesting because we tried to make an inductive work for the audience, trying to address since the translational research in gastric cancer and also oesophageal cancer and then trying to summarise what we have today in terms of targeted therapies, what trials we had that were positive, what trials were negative and also from those trials that were negative where we try to analyse what we could learn for the future trials in terms of selection of biomarkers, selection of patients and selection of target combinations to improve the outcomes in the near future.

Another thing that was very interesting that we addressed at that session was some topics regarding immunotherapy. Immunotherapy, as you know, is the cornerstone of many types of tumours like lung cancer, melanoma, [?? 1:15] cancer. So we have today pembrolizumab that is approved in Europe, the United States and also in Brazil as well to treat several types of cancers. We have nivolumab and other types of immune checkpoint inhibitors that are coming faster and faster in the new scenario today.

With respect to the gastric cancers we addressed gastric and oesophageal cancer. We addressed initially in our section the whole of some biomarkers like BRCA biomarker, like ATM biomarker, like HER2 as well. And also some techniques that you can use to assess and to address these biomarkers, for example NGS sequence. We also raised in the session that today it’s very important and it’s mandatory to assess HER2 biomarkers for every advanced gastric cancer that we have in our practice if it has an ECOG PS 1 until 2 or zero. So you can address these biomarkers in order to optimise the treatment and add trastuzumab if actually it’s pertinent to this type of patients.

As part of that we discussed ATM biomarker and olaparib because ATM biomarker negative patients were initially assessed for patients with gastric cancer and found that olaparib could have a good hold at this type of patients but unfortunately these were the results of a phase II trial, phase II 39 trial, that show actually some results in terms of the overall survival. But in the phase III trial, GOJ [?] trial, unfortunately these results were not actually significant. But despite that we discussed in that section that the results were not significant but some issues could be improved probably for a new trial in terms of how can we assess ATM in this type of patients and what kind of other biomarkers we can assess to see if olaparib or not actually has a result in terms of overall survival for this type of patient. This biomarker could be, for example, BRCA. BRCA mutation we know very well that is a predictive biomarker for olaparib in other types of tumours like, for example, ovarian tumours. Also we could try to put it in the clinical practice for EG junction and gastric cancer as well.

Another type of biomarker we discussed was biomarkers that were involved in the resistance of immune checkpoints like MDM2, JAK1 and 2. So that was really discussed and I think it could come for the clinical practice in the near future.

In terms of immunotherapy we know that gastric cancer has a very high tumour burden mutation rate, especially in patients that are MSI high. So these are some subsets of patients that could respond very well to immune checkpoints like pembrolizumab, according to some phase II trials that we have. Probably in the near future tumour mutation burden could have a place as well in advanced gastric cancer to help us to select patients or tailor treatment in the best way of the practice.

In terms of overall take-home message, we know that today gastric cancer is a huge challenge disease, it’s a disease with a very high heterogeneity so in terms of molecular classification we have different partners among the distinct areas in the world. The Hispanic and Latin American people are not well studied in this type of classification so we need to focus our research and try to find out the profile of the TCGA classification in Hispanic patients as well because we have very high incidence areas in Latin America and also in the United States with Hispanic patients as well. So we should focus on this research.

We should also understand better other biomarkers and incorporate them into clinical practice to select better the immune checkpoint inhibitors and try to acquire better results in this type of patients. Also we should try to find out good combinations, or the best combinations, of immune checkpoints and also targeted drugs that could improve the outcomes in clinical trials as well.

So in the end I think gastric cancer is a very difficult disease to treat, it’s very heterogeneous. We still do not have too many weapons to treat that but things are going very fast in this scenario and will change in the near future. 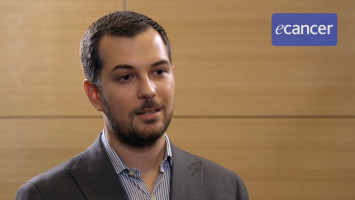