Dr Bray speaks with ecancer at AORTIC 2017 about the work of IARC in gauging and managing the global burden of cancer.

He describes how changing demographic and understandings of cancer are changing long-term prospects of cancer incidence and survivorship, and outlines cancer registry programmes working internationally to improve and utilise data around cancer aetiology.

One of the things we do is we are part of the WHO specialised agency for cancer and for the last fifty years we’ve been developing statistics on the global burden of cancer. One of the key pieces that we work with WHO on is to develop the statistics and understand the future cancer burden as well. So we know there is going to be something in the order of thirty million new cancer cases by 2035, currently it’s about 14.1 million new cases. So the scale of cancer is increasing greatly, partially because of demographic effects, the impact of population aging and growth, but also increasing risk and the changing profile of cancers as well.

That’s important that we know that but we really need also local data and the best way to get better global data as well as local data is to support cancer surveillance, both in terms of incidence and mortality. We are buoyed by the high level impetus that we see for NCDs and cancers and governments now trying to tackle the increasing burden from NCDs and cancer. One of the key pieces has been the WHO cancer resolution which actually places an onus on countries, asks countries, urges countries, member states of WHO to collect population based incidence and mortality data. There are excellent initiatives going on to try and develop civil and vital registration systems. WHO are working with Bloomberg Philanthropies, for example, on their Data for Health initiative. We have, as an agency of WHO, developed something called the Global Initiative for Cancer Registry Development which is really trying to promote and advocate and develop cancer registries, improve the quality and the availability of that data in countries in transition because not only do we face an inequity in terms of the cancer burden, there’s going to be a much greater increase in the burden in countries in transition, so we’ll see a doubling in countries that are currently classified as low Human Development Index in the next twenty years but also the data is lacking. So if we’re going to try and inform cancer control policy in terms of being able to plan, monitor and evaluate cancer control initiatives in the next years we need to develop the population based data. That way we get good global estimates but we also get local data on the ground that we can actually use to plan.

So this global initiative is a partnership, a coalition of willing, of many international and national organisations, avoiding the usual duplication and fragmentation, working together to try and develop and support population based cancer registries worldwide but particularly in low and medium income countries because at the moment only one in three countries actually has a high quality population based cancer registry. So our strategy is one of global coordination, we are the agency responsible for developing this initiative but we’re trying to develop and we have developed a series of regional hubs. These are centres of expertise, reference centres if you like, whereby there are high quality persons in place within the region who can actually target and advocate and support cancer registries within defined regions. We have five up and running, we have a final one in the Pacific islands coming next spring which will service in total 150 countries. Our major long-term goal, say by 2025, is to have fifty high quality population based cancer registries in countries in transition that do not exist at the present time. We believe we can do it because we have this partnership and we have this political will that perhaps wasn’t around twenty years ago that really has come to prominence.

How have things changed in recent years?

It’s changed a lot over the last decade actually. This is new and it’s based on this knowledge now, this pending burden of NCDs and cancer; it’s based on the inequities both in terms of the burden and the surveillance data that’s in place. We really do need to be able to plan our cancer control and cancer services in countries in transition so we need to help, particularly in the technical advice to governments in how to plan cancer registries, but we have the opportunities now in terms of the high level political impetus and, as I said, the WHO Cancer Resolution that places an onus on countries to collect this information. So it’s a new thing and we have now an action that hopefully can make a step change in surveillance data.

Anything else to note?

It’s only to note that in sub-Saharan Africa, although it’s true to say it’s the same in Latin America and Asia, it’s less than 10% coverage of cancer registries in terms of the overall total populations. We’re making a lot of progress in terms of the Global Initiative for Cancer Registries and in sub-Saharan Africa we now have an African Cancer Registry Network which actually has now thirty registries, population-based cancer registries, in over twenty countries. Some of the data is not yet of high quality but they’re doing a tremendous job in terms of supporting cancer control initiatives in the country. They need to be encouraged, developed, supported in order to improve the quality and the sustainability overall.

27 May 2020
Cancer treatment in the age of COVID-19 and the current worldwide impact
Prof Richard Sullivan - Kings College London, UK 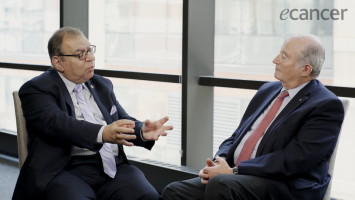