Improving eligibility for the elderly in clinical trails

He discusses the fact that older patients are underrepresented in clinical trails, some of which may be due to complications such as co-morbidities which makes it harder to take part in these trials.

As cancer treatment methods change, it also becomes more difficult to take part in these trials, leading to a knowledge gap for understanding drug development for elderly patients.

Dr Lichtmann discusses initiatives that have been undertaken to reduce this problem, and increase the eligibility of elderly people in clinical trails.

The basis of that is the idea and the well-known information that older patients are under-represented in clinical trials. Part of that is because of certain barriers to participation in clinical trials and one of the barriers is some physiologic changes in comorbidity. Some of the comorbidity issues also affect even younger patients who may have kidney disease, for instance, or heart disease but because of the physiologic changes with age plus comorbidity it disproportionately affects older patients.

The other thing that has come about is the whole issue about cancer treatment. We are moving from traditional chemotherapy to targeted therapy, immunotherapy, biologic therapy. So issues about eligibility for clinical trials have changed a little bit. So what we did was we looked at the issues of how we could increase accrual to clinical trials. One of the first areas we looked at was kidney function because, of all the comorbid issues, it probably affects the most people, it probably excludes the most people from clinical trials.

My own study I looked at patients who were receiving adjuvant treatment for breast cancer and we looked at their creatinine clearances and found out that if you appropriately adjusted the chemotherapy dosing the patients could complete chemotherapy, not have excessive toxicity and derived a benefit from treatment and were safe. It didn’t increase toxicity. At the same time ASCO was organising a project modernising clinical trial eligibility and because of the work I did I was the Chair of the organ dysfunction group and we looked at a number of issues, including kidney function, hepatic function, cardiac issues and prior malignancies because those are the real big areas that exclude patients from clinical trials. We had access to a huge database of patients, 13,000 patients newly diagnosed with cancer, plus other studies done in cooperative groups in addition to the one I did. The bottom line was, as I said earlier, if you appropriately dose adjust the therapy, even if patients had some mild to moderate renal insufficiency they could be treated successfully and be treated safely.

So hopefully by doing that we’ll expand the group of patients who are on clinical trials because if you do that it doesn’t just help get more older patients on trials, it improves the generalisability of clinical trials, they’re  more applicable to real world situations.

Just to go back to the other issues for one second, when we looked at other issues such as hepatic function, cardiac, we made some minor suggestions in terms of parameters for study but it probably wouldn’t lead to many more patients on study. The predominant change would be with the kidney function.

The other issue that affects older patients, it’s not an organ dysfunction issue per se, is the issue of prior malignancy. Upwards of 10-20% of older patients have had cancer before and they’ve been treated for cancer so if you exclude those patients you’re losing another 10-20%. So we made some parameters of, for instance, patients who had been in remission for two years, patients who didn’t need active treatment but still should be eligible for clinical trials.

So, in terms of organ dysfunction that’s what I spoke about and that’s really the crux of the issue of the modernising clinical trial eligibility project.

How was the discussion surrounding this?

People were appreciative of that kind of investment from ASCO, for instance, because when these things will be published, actually they’re published online already, but when they’re in print I think it will influence a lot of people to expand the clinical trial eligibility or I hope it will. It may not make a big impact right away because trials are already ongoing and I don’t think they’re going to change in mid-stream. I think it will get people to think about it. With computers, cut and paste, copy forward, automated kinds of systems, we get into this rut of just perpetuating the same eligibility without even thinking about it. I think what this will do, the next go around of studies that are being developed, people will hopefully say, ‘Well, hold it, does it have to be 60, the creatinine clearance? Could I make it 40?’ So even if you get an extra 5-10% of people over the course of time that will be a big deal. So I think it will be a lot of improvement in that situation. The crux of the discussion was very positive and for a lot of people it’s a long time coming. It’s long overdue that we consider these issues. 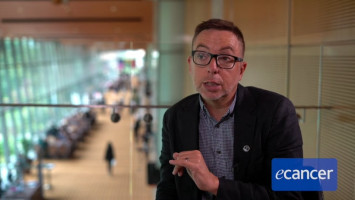