New biomarkers for response to immunotherapy

Prof Ribas speaks with ecancer at WIN 2017 about "the canary in the mine" of PDL-1 expression on tumour cells, and their response to checkpoint therapy.

He notes the off-target toxicities of ipilimumab, and the rationale for combining therapies to increase T cell infiltration beyond CTLA-4.

Prof Ribas notes the importance of the tumour microbiome in determining immunotherapy response, and the differing outcomes of adjuvant vs neoadjuvant staging.

I work in the field of tumour immunology, we’ve been applying concepts to turn on the immune system to fight cancer for many years and only recently have they become mainstream in oncology treatment. That’s because we found a way to release a late brake that was inhibiting the immune response to cancer because the cancer was protecting itself by expressing PD-L1 ligand to a negative regulatory immune receptor. Whenever we release this interaction with therapeutic antibodies we now have a significant number of patients with melanoma and other cancers that respond to therapy, where their immune system starts attacking the cancer cells.

The key to developing biomarkers for PD-1 based therapies is understanding the biology of what’s supposed to happen and figuring out what’s missing in patients who do not respond. There are several things that need to happen: the cancer needs to be different from normal cells, it needs to have something that makes it look like a foreign cell to the body. That’s more frequent when there are more mutations, for example, ultraviolet light or cigarette smoking induced mutations and those cancers with a higher mutational load are more likely to be recognised as not normal by the immune system. Once the immune system does that then it needs to infiltrate the tumours and the pre-existing of T-cells inside the tumour before starting PD-1 blockade is a prognostic factor for response. But those T-cells need to trigger the PD-L1 resistance mechanism, so the T-cells go in, they see tumour antigen, the tumour protects itself by expressing PD-L1. So it might be that PD-L1 positive or negative is not what’s important, it is PD-L1 positive induced by an immune response is the canary in the mine, is what tells us that the immune system of that patient was trying to attack the cancer and the cancer is protecting itself through PD-L1.

Is that where ipilimumab comes in?

Ipilimumab is a blocking antibody to CTLA-4 which is an earlier checkpoint. CTLA-4 is important when the T-cells are being trained in the lymph nodes by dendritic cells to be able to be licensed to kill based on the antigen they’re exposed to. They require two signals: the antigen presentation and co-stimulation. But co-stimulation is hijacked by CTLA-4 so if you block CTLA-4 the T-cells can have both signals. With that, then the immune system can go round the body and attack the cancer but they can also attack many other places in the body. That’s why combinations with ipilimumab have a higher frequency of toxicities because the effect of releasing this brake is broader on an immune response as opposed to the more targeted immune response induced by blocking PD-1 which is only relevant to the T-cells that are in the tumour turned off by PD-L1.

The field of PD-1 blockade therapy can be rationalised by the patients that have a pre-existing immune response that just needs to be released by blocking PD-1 to PD-L1 interactions. Those are higher mutational load, previously infiltrated at PD-L1 positive tumours. In the rest we need to bring T-cells into tumours, they are not there so they are not being turned off by PD-L1. But it’s logical that if we induce an immune response we’ll have to turn off PD-L1 so that’s why we need a combination. The combination of ipilimumab with PD-1 blocking antibodies can bring T-cells into tumours and lead to increased frequency of responses in patients with melanoma and other cancers. The big drawback is that it also significantly increases auto-immune toxicities. Overall in some patient populations it makes a lot of sense to do such a combination.

But there are other combinations being developed. We can think about other immune activating antibodies that will turn on the immune system, step on the gas, like OX-40, CD137, CD40. We can think about inhibitors to other checkpoints – TIM-3, TIGIT, LAG-3, all of them already in clinical trials. Also thinking about changing the tumour microenvironment in a way that can be more permissive to the immune response. We can do this by either injecting into the tumour with oncolytic viruses or TLR agonists or by inhibiting the immune suppressive factors in the tumour - TGF-β being one of them but also macrophage and myeloid derived suppressor cells that are actively turning off T-cell infiltration or also Wnt signalling. With all of these in the future we will be having doublet or triplet therapies and we’ll start understanding which patients are more suitable for one or the other. This is not going to be random. Patients respond because there’s a series of biological events that lead to the response or lack of and if we understand the lack of response then we can think which combinations should be developed to reverse that situation and bring benefit to more patients.

Are these adjuvant or neoadjuvant therapies?

PD-1 blocking therapies are now being tested in the adjuvant setting; ipilimumab has been approved for the adjuvant treatment of melanoma. In the adjuvant setting we have a different situation: we had a cancer in place that has been taken out, we have micrometastatic disease that may appear in the next months, years or never, so the interaction between the cancer and the immune system may be different from a tumour that’s growing progressively. It is possible that responses to PD-1 blockade therapy, for example, will be higher in more advanced disease than in the adjuvant setting because in more advanced disease the immune system may be trying to do something about the cancer, in micrometastatic disease it may not. We don’t know, it should be tested. With the low frequency of toxicities and the potential benefit it’s obvious that it’s being tested and I look forward to the results of these studies. 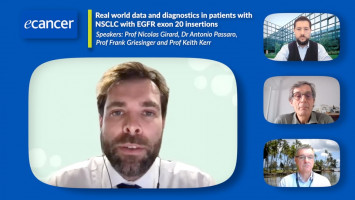