Nivolumab and ipilimumab for metastatic sarcoma

Dr D'Angelo speaks with ecancer at ASCO 2017 about results from a phase II multicenter trial of nivolumab with or without ipilimumab for patients with metastatic sarcoma.

She notes the success of those responding to treatment, with a manageable toxicity profile, and considers how response rates could be improved considering the frequency of treatment related adverse events.

Nivolumab and ipilimumab have also been trialled in combination to treat advanced skin cancer, as discussed by Dr James Larkin at AACR 2017.

This was an exciting clinical trial. We were able to conduct this phase II study looking at nivolumab with or without ipilimumab in patients with metastatic sarcoma. It was conducted through our Alliance Clinical Trials in Oncology Group with support from the NCI and CTEP. In this study we randomised patients to receive a single agent or the combination agent. We observed some interesting findings: first the combination was actually fairly well tolerated, the incidence of grade 3 or 4 treatment related adverse events was only 14% compared to 7% with the monotherapy arm. In addition we saw evidence that the combination was actually superior in terms of efficacy compared to the monotherapy arm. With the combination cohort it was demonstrated that the overall response rate was approximately 16% and in addition the median overall survival for patients treated on the study was about 14 months with 54% of patients alive at twelve months. These were patients that were extensively and heavily pre-treated, over 60% of patients had received at least three prior lines of chemotherapy. So it really forms a foundation to begin to explore these combinations further in the field of sarcoma and really the challenge is trying to identify a biomarker that will help us predict which patients are most likely to benefit and then ultimately deciding on future confirmatory clinical trials.

That’s a great question. There is some suggestion in the field that sometimes when patients have adverse events to checkpoint inhibitors they may be more likely to benefit. However, this has not been proven on this particular clinical trial and further in a cohort of patients with sarcoma. So it’s a point well taken, we always have to weigh the risks and benefits of each of the therapies we offer our patients but ultimately the metastatic disease, from my perspective, offers a bigger risk. So a good discussion with your patients in terms of what to look out for and being proactive in recognising those immune mediated adverse events can really help us bring these treatments to our patients safely.

Could anything be done to improve the response rate, if it’s priming the microenvironment or you mentioned the heavy pre-treating, bring this combination forward to second line or even first line setting? Something to bring that up?

That’s a great point and there is lots of interest in perhaps bringing patients in that have had less prior therapies. That’s very important. We’re aiming to modulate the microenvironment with ipilimumab at this point but you raised the point as to should we consider other combinatorial strategies in sarcoma. The fact that we’re seeing these response rates suggests that there’s certainly more work to be done and exploring other agents probably is something that will happen in the near future.

Speaking of the near future, are there any plans to take these trial results forwards in further trials or something we could look out for coming up soon?

Yes, we’re exciting about planning future trials. We’re in the preliminary stages of that but I do anticipate there being a trial at some point in the future, I don’t have an exact timeline as of yet. 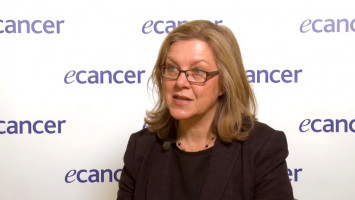 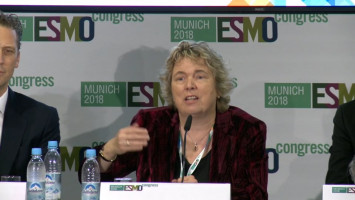