Thank you very much. I want to tell you about the results of a randomised trial we have done of an intervention that we’ve developed really over the last ten years. It has been a labour of love and it has focussed on people with metastatic and advanced cancer. The term ‘Managing cancer: living meaningfully’ or the acronym CALM refers to the fact that the intervention addresses both the practical problems that people face, and there are many – how do I manage my pain, my symptoms – but also the profound problems and issues that people face – what is the meaning of my life that having a terminal diagnosis brings?

Although these problems and challenges with metastatic and advanced cancer, cancers where people might have a prognosis of 12-18 months, although these issues and challenges are predictable and cause a lot of distress there hasn’t been a routine or systematic approach to help people with these problems. So we’ve developed a novel psychotherapy to alleviate and prevent distress and to help people manage these difficulties; it’s relatively brief, at least in the world of psychotherapy, 3-6 sessions. It’s delivered by trained therapists and it supports reflection in four broad domains – symptom management and communication with healthcare providers; treatment decisions; all the changes in self-concept, how we feel about ourselves when we have a disease which affects every aspect of our physical being and our life; and the changes in relationships, our need to depend on other people, for example, when we have a progressive disease. The sense of meaning and purpose in our life, that’s something we all need to think about but having a disease which creates a prognosis of 12-18 months heightens that dilemma, and helping people deal with fears, concerns about the future.

As I said, the participants in a study like this are patients with advanced cancer. These are adults, fluent in English without cognitive impairment. They were randomised either to the invention with usual care or to usual care alone and depressive symptoms, measured by the PHQ-9 were the primary outcome with a variety of secondary outcomes and we had assessments at baseline, three months and at six months, three months being the primary endpoint.

What we found is that we had a significant effect on the primary outcome at the primary endpoint, depressive symptoms at three months, and these effects were actually strengthened at six months. Now, in terms of the meaning, what is the significance of that reduction? We found that there was a clinically meaningful reduction in depression in 52% of the CALM group compared to 33% of the usual care group and in 65% versus 35% at six months. That’s greater than five points on this scale of depression.

We also found that not only did it treat depression but it also had a preventive effect so that participants who were not depressed at baseline were less likely to be depressed at three months. There were a variety of secondary outcomes which also favoured the intervention: the extent to which people felt they could talk and feel understood about the impact of cancer; manage feelings about the cancer in the future; communicate with their healthcare team and their family; deal with challenges in their relationships; clarify their values and beliefs and prepare for the end of life.

What do we conclude? That CALM appears to be an effective intervention that alleviates distress in people with advanced or metastatic cancer and helps them to manage the profound and the practical problems that they face. We found that there is great generalisability to this intervention; we have now trained people in more than twenty countries including in Europe, in the Middle East, in Asia and in South America, and we’re now in the process of establishing a global network to train health professionals including oncologists, doctors, nurses, psychologists, psychiatrists in delivering CALM and evaluating its effectiveness and feasibility in all of the geographic settings that we have represented at this meeting and beyond. 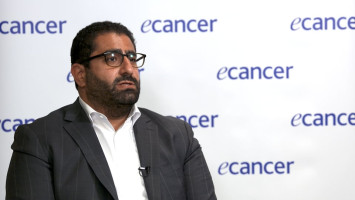 3 Dec 2021
The use of PARP inhibitors in oncology from a palliative care perspective
Judy Knudson, PA-C - University of Colorado, Denver, USA