Dr Schadendorf speaks with ecancer at EADO 2017 about objective response as a possible milestone for the administration of checkpoint immunotherapy.

Taking current ipilimumab protocols as an example, he considers how long PD1 antibodies might be administered to achieve maximum clinical benefit.

Based on data from KEYNOTE-001, Dr Schadendorf questions that patients who achieve complete response may be primed, or sensitive, to other immune therapies should they relapse.

In Checkmate 69 and 67, combined ipilumumab and nivolumab resulted in nearly half of patients discontinuing due to toxicity, but there was little difference in PFS and response rate between those completing their course and those ceasing early, leading Dr Schadendorf to consider how long these potentially toxic courses are required for significant benefit.

He goes on to consider the wider trial designs and health-care provider stakes in drug discontinuation.

At the opening symposium a very interesting discussion on checkpoint blockade - how long do we need to treat. Currently we have experience with ipilimumab as the first generation of checkpoint inhibitors. Ipilimumab is given in stage 4 melanoma as four infusions in a three weekly interval, so after twelve weeks you are done with your treatment. All the effects we are seeing later on, including patients surviving for three, four, five years, are actually born in this twelve week treatment period. We have roughly 20% of patients who have a long-term benefit using ipilimumab. These four cycles of ipilimumab are given without looking at response rate and tumour control. We know all these figures, we know that the progression free survival at twelve weeks is roughly two to three months PFS and a response rate in the range of 10%. But still there are 20% of patients who have obviously a benefit which is long term.

So now we have the new treatment paradigms including PD-1 antibodies recently approved in Europe and across the world. PD-1 antibodies have less toxicity, they have a very safe profile and currently the recommendation in the label is that PD-1 antibodies are given for up to two years and these are infusion intervals of two to three weeks that the patient could stay on treatment. So the question is how long do we really need to treat for maximum clinical benefit for these patients; that’s academically an interesting question and also of high clinical relevance for patients and doctors. So we have some first evidence that in patients who achieved a complete response, so a complete resolution of all metastatic lesions, that those patients where you stop treatment obviously have an ongoing treatment benefit without further need of treating these patients. So currently we have data from KEYNOTE-001, which is a phase I study using pembrolizumab. This treatment was stopped in more than sixty patients, data were presented already at last year’s ASCO and we know that it takes some time to declare a complete response but as soon as you have the complete response obviously it’s a long duration of response, probably for years. So the open question here is how long really is a complete response and if a patient really would relapse are these patients sensitive for re-treatment with PD-1 antibodies. An open question.

The second piece of evidence we have is patients who got treated with ipilimumab plus nivolumab, a combination treatment which was done in CheckMate-069 and CheckMate-067. A pooled analysis of more than 400 patients, this pooled analysis, and this analysis showed that roughly 50% of patients discontinued because of toxicity and the median time for this patient group who discontinued for toxicity was eight weeks. If you look at tumour control overall response rate, progression free survival, you could see that these patients who discontinued because of toxicity had the same clinical benefit in terms of progression free survival, response rate, which was even a little bit higher, than the patient group who continued treatment. So another piece of evidence that obviously you don’t need to treat for indefinite time intervals.

So the open question is at the moment whether patients who have to discontinue because of toxicity are more susceptible to toxicity but also to response so that there is some sort of inflammatory priming already which has happened which then sensitises the patients to a good tumour response and also toxicity. That’s one of the ideas; it could also be that we only need to treat up to a certain period of time and whether we see initially a complete response or a partial response or not is irrelevant.

Are there plans to conduct further trials with more active surveillance?

Obviously companies have more difficulties to stop early giving their drugs because obviously there is a certain interest but payers’ academic interest is high to have clinical trials designed which have also early stopping in comparison to usual in-label treatment. The financing of these trials obviously is more difficult, you need health insurance or federal financing of such a trial but I’m pretty convinced that some of the countries and some of the paying organisations will be quite interested in performing those trials. In the UK such a trial is currently close to opening, over the summer probably.

Was there any audience feedback around the issue of toxicities?

What we know is that checkpoint blockade, whether you use ipilimumab or the PD-1 antibodies, that the toxicities we see are completely different to chemotherapy, they are completely different in their spectrum to targeted therapies. So since the immune system is affected, modulated, the side effects we are seeing, most of them are related to the action of the immune system or immunity. So all organ systems can be involved, from the gastrointestinal system to the nervous system, connective tissue, everything can be affected. The interesting thing is that ipilimumab as an agent which is affecting the priming of the immune system is obviously having a different side effect profile, is producing more, for example, GI toxicity and more hepatic toxicity in contrast to PD-1 antibodies which have a safer profile in terms of GI toxicity, there are almost no grade 3/4 GI toxicities, but you are obviously getting more nervous system associated side effects we have not seen with ipilimumab so far.

The combination of ipilimumab and nivolumab is producing in roughly 50% of the patients grade 3/4 toxicity so that’s really severe toxicity which needs to be handled by experts and standardised procedures in order not to harm the patient.

We have quite interesting times in treating melanoma at the moment and it’s actually not only checkpoint inhibition which is catching our attention, it’s also the new wave of combining targeted therapies with checkpoint inhibition. There are two clinical trials which are currently in the phase of initiation combining BRAF MEK and a checkpoint inhibitor by Roche and by Novartis which are globally targeting a new registration of this combined treatment approach and everybody’s hoping that that will be the next step in treating metastatic melanoma. 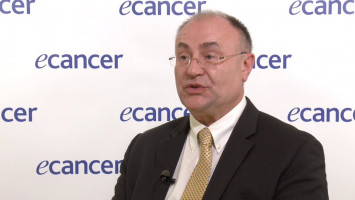