In the PALOMA trials, Dr Criscitiello describes the successes of palbociclib of treating patients sensitive and resistant to endocrine therapy.

Considering the therapeutic and financial value of establishing a prognostic biomarker, Dr Shubassi looks to substrates in the endocrine pathway that may prove useful, though none has yet been established.

Prof Conte highlights that, for patients best suited to endocrine therapy, CDK therapy may be suitable in a second line setting, but that a number of long-term questions about CDK suitability remain unanswered.

Discussion then turns to the significance of progression-free survival as a trial endpoint in comparison to overall survival, which requires data gathered over a time-scale not yet reached in any trial of CDK inhibition.

MONALEESA2 and PALOMA 2 was previously contrasted by Dr Michael Gnant at ESMO 2016.

Dr Alison Jones spoke at an ecancer CDK symposium at EONS 10 about how best to manage side effects associated with CDK inhibitors.

For more on the cellular mechanisms of CDK inhibition and ongoing trials, a webcast of the ecancer ESMO 2016 CDK symposium is available here.

Supported by a grant from Pfizer Inc.

GC: Hello, Good Morning, we are in Vienna. It’s March 15th and let me introduce this distinguished faculty: we have here Professor Pierfranco Conte, we have Dr Shubassi and Dr Criscitiello and we will discuss about CDK4/6 inhibition. So I have the first question for Professor Conte – please can you summarise all the data of ribociclib in the MONALEESA programme please?


PC: Yes, the MONALEESA programme is a very extensive and ambitious programme trying to evaluate the value of adding ribociclib, one of the CDK4/6 inhibitors, to endocrine therapy. So we have now the data for the MONALEESA2 trial where patients with de novo metastatic or no prior pre-treated metastatic breast cancer were randomised to receive either letrozole placebo or letrozole ribociclib. That trial was positive, there was a significant prolongation in progression free survival with the hazard ratio being 0.55 in favour of a combination. Also the trial confirmed the type of side effects associated with this combination which essentially are myelosuppression which is always reversible. There are other trials with ribociclib, the MONALEESA3 where fulvestrant is the endocrine companion of ribociclib, the MONALEESA7 which is conducted in the premenopausal patient population and a lot of other trials addressing specific clinical subtypes, either in the neoadjuvant or in the metastatic setting.

GC: Dr Criscitiello, what about the PALOMA trials?

CC: The PALOMA trials have tested the use of palbociclib, which is one of the first discovered CDK4/6 inhibitors, in different settings. The first trials run were the PALOMA1, PALOMA2 and PALOMA3 trials  run in the metastatic setting of patients with ER positive, HER2 negative breast cancer. Despite the fact that they included different patient populations because the PALOMA1 and PALOMA2 trials involved patients who were endocrine sensitive in their first line of therapy in these trials palbociclib was combined with letrozole while the PALOMA3 trial [?? 2:39] patients who were endocrine resistant in their second line of treatment which palbociclib was added to fulvestrant. The results are pretty consistent across different trials, both in terms of progression free survival and quality of life because it’s worked, the main benefit coming from these studies and from these drugs is that we have improved the survival outcome of our patients without compromising their quality of life because the safety profile of this drug is quite good and the side effects are manageable.

GC: Dr Shubassi, since we are testing and using in the clinical practice very expensive drugs do you believe that we may identify specific biomarkers, most likely predictive of response to CDK4/6 inhibitors? Because up to now in both the PALOMA trials and in the MONALEESA trials no predictive biomarker has been identified with the exception of oestrogen receptor.

GS: Yes, I think it’s a great question. To answer that it’s important to define what targets there are of the CDK4/6 enzymes. So CDKs are key enzymes that regulate cell cycle transitions at various stages but because they phosphorylate an array of substrates it is extremely important to define what other substrates are being phosphorylated and therefore regulated by these CDK4/6 specifically for this symposium. So if we are able to define these substrates, and we all know that there is a strong interplay between CDK4/6 and the ER endocrine pathway, then likely we could use some of these targets as a way to predict and, as you say, assess biomarkers prior to designing all these expensive drugs. So I hope that.

GC: I do believe finally we will never find up to now a specific biomarker. And the clinical benefit is there as we improve the progression free survival and response rate. I have one final question for Professor Conte – now we need to have a new order in the treatment of ER positive metastatic breast cancer, so which is your personal perspective? We have many agents and we need to have a new paradigm shift.

PC: Of course this is a rapidly evolving field so my perspective as of today, March 15th, might be different in a few weeks or months. But as of today I believe that there is a significant proportion of patients with ER positive HER2 negative advanced breast cancer who should be treated upfront with a combination of CDK4/6 inhibitors plus endocrine therapy. There is still a proportion of patients who might be treated upfront with single endocrine agents and these patients should receive in second line CDK4/6 inhibition. There are many questions that we as clinicians and as investigators should be able to address and answer once all these drugs are available in the clinical practice. One question is should we continue to inhibit CDK4/6 upon progression by changing the endocrine companion, for instance? Should we change the CDK4/6 inhibitors at the time of progressive disease, etc. etc.? A lot of questions which have not been answered by clinical trials so far and that, in my view, need to be answered in order to provide the best outcome to our patients.

GC: What about the safety profile and, specifically, can you better explain the neutropenia emerging with CDK4/6 inhibition and the management also?

CC: Yes, sure. Neutropenia is the most commonly observed adverse event with CDK4/6 inhibitors because there is an inhibition of the neutrophil proliferation as well while inhibiting CDK4/6. However, this is not clinically significant, it’s usually not febrile neutropenia, patients do not perceive any symptoms and it’s usually reversible spontaneously by delaying the restart of treatment by one more week so we do not usually need the use of GCSF factors. I think that if we are talking about neutropenia as the most relevant side effect observed with CDK4/6 inhibitors this is quite reassuring because this kind of neutropenia is not worrying at all.

PC: Certainly progression free survival is a clinically meaningful endpoint for a couple of reasons. First of all because in these trials the gain in median progression free was quite huge, really important. Second, because by delaying progressive disease you delay the start of the second line therapy which in most of the cases, or in many cases would be chemotherapy which has a lot of toxic effects, of course. Of course survival is always very important, it’s still too early to see whether there is a survival benefit. I am rather optimistic; I hope that at least in terms of a strong trend in favour of CDK4/6 inhibitions we will be able to see this kind of survival gain. But even in the absence of overall survival gain, in the light of huge improvements in progression free, the good tolerability profile, I do believe that progression free survival is a clinically worthwhile endpoint.

GC: Thank you very much. 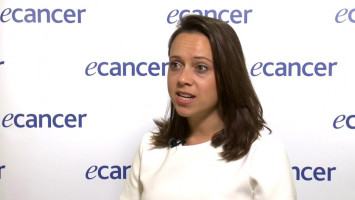