These results and the fact that denosumab can be administered subcutaneously, lead to the suggestion that it will become a new standard of care for the management of bone disease in multiple myeloma.

These findings are also discussed by Dr Raje here

This is one of the largest studies conducted in the field of multiple myeloma, not only bone disease but in the field of multiple myeloma, with more than 1,700 patients with symptomatic disease who were randomised, newly diagnosed patients were randomised, to receive either zoledronic acid at the standard dose of 4mg every four weeks or denosumab at the dose of 120mg subcutaneously every four weeks again. So the primary endpoint of the study was the non-inferiority of denosumab versus zoledronic acid and this has been achieved. The superiority, which was the secondary objective of the study, of denosumab over zoledronic acid has not been achieved but there are some other exploratory endpoints in the specific study that are of great interest. One of those was that the PFS and the overall survival because there were some signals from other studies in the past that zoledronic acid may be more efficacious in terms of overall survival over denosumab. This was not the case in this study, both denosumab and zoledronic acid have shown comparable overall survival.

But the very interesting thing for this study which was stratified regarding novel agents versus non-novel agent based therapies as frontline therapy and also transplant versus non-transplant, there was also stratification for this point, in this study for the first time we have seen that denosumab had a progression free survival superiority over zoledronic acid. This is extremely promising and we need to further investigate on that. The second very important point, as I previously mentioned, is that renal adverse events are much lower in the denosumab arm and in some cohorts of patients it’s even half of the rate that the zoledronic acid has given regarding renal adverse events. This is extremely promising also.

What does this mean for patients?

This means that first of all denosumab is going to be one of the standards of care for the management of bone disease in multiple myeloma. As many of the treatments of multiple myeloma are given orally now, like lenalidomide, pomalidomide, Velcade is given subcutaneously, many patients have to be in the clinic every month in order to have an intravenous zoledronic acid administration, or pamidronate in the countries that use pamidronate. Now denosumab is given subcutaneously so it’s much comfort for the patients first of all. Second, the PFS advantage that of course has to be further investigated but it may give a signal for an anti-myeloma activity of denosumab. Third, the less renal adverse events of denosumab compared to zoledronic acid first of all give us the possibility to give it more easily to patients with at least mild to moderate renal impairment and also in all patients because you know that renal sufficiency is a problem in multiple myeloma. When we have an agent that produces less renal adverse events compared to another agent the majority of the physicians will prefer to give such a less toxic agent than the standard of care today. 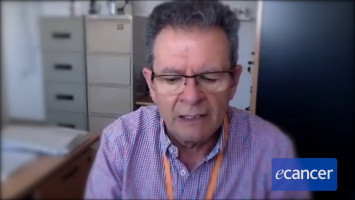