Prof Neoptolemos meets with ecancertv at ASCO 2016 to discuss ESPAC-4, an international phase III trial of gemcitabine and capecitabine in combination, or as mono therapy, for patients with resected pancreatic ductal adenocarcinoma.

With 732 patients, the European Study Group for Pancreatic Cancer (ESPAC) 4 trial is the second-largest clinical trial ever conducted in patients with pancreatic cancer who had undergone surgery.

The median overall survival was 28.0 months with the combination regimen vs. 25.5 months with gemcitabine alone, and the estimated 5-year survival rates were 28.8% vs. 16.3% in the two groups.

Watch the press conference and read the news story for more.


It was submitted and was selected as a late breaking abstract. This was the ESPAC-4 trial, ESPAC meaning the European Study Group for Pancreatic Cancer which has conducted some important studies in the field. We presented our results on a randomised phase III controlled trial in patients who have had resected pancreatic ductal adenocarcinoma. We compared standard adjuvant chemotherapy, six months intravenous gemcitabine, with the combination of intravenous gemcitabine and oral capecitabine also for the same number of cycles - six months, six cycles.


What kind of results did you see?


The trial itself was planned for 722 patients with an equal number in each arm. The study accrued quicker than expected, or quicker than target, quicker than planned for, and the Independent Data and Safety Monitoring Committee asked us to report sooner than the number of anticipated events because there were interesting findings.


The results showed two things. Firstly, that there was no significant difference in complications in toxicity, overall toxicity, between the two treatment arms. Obviously some differences between one arm and the other but overall they balanced out. So that was good. The proportion of patients that had fatigue, for example, grade 3/4 fatigue, was only 5% in the gem arm and 6% in the combination arm so it was good to see that in the adjuvant context. So that was one side of it, the other side of it was that the overall survival rate was significantly better in the combination arm with a hazard ratio of 0.82. This translated into a five year survival benefit of 16% with the gemcitabine arm, as we’ve seen previously in this group of patients, but the combination arm now produced an estimated five year survival rate of 29%. So this really represented a significant improvement compared to what we’ve ever had previously before.


Pancreatic cancer is famous for being hard to treat and hard to manage.


It is, it is but it’s been a misrepresentation to say that no progress has been made. Yes, pancreas cancer has now moved to be the third commonest cause of death in the United States, just ahead of breast cancer, it’s the fifth commonest cause of death, for example, in the UK. But one year survival rates are improving and overall survival rates are improving. So we can now see clear water between the number of new cases diagnosed and the number of patients that are dying from pancreatic cancer. So, for example, in the US we’re looking at a newly diagnosed case rate of around 53,000 per year compared to, say, 42,000 dying. In the UK this is 9,400 new diagnoses per year and 8,800 dying. Previously the numbers were identical but things are beginning to change in both the advanced setting but even more dramatically in the adjuvant setting.


Will these trials continue or are they moving forwards? What are the next few steps?


Where do we go next? There are a number of adjuvant trials that are in a state of maturation. So, for example, there’s a big study in France, not quite as big as ours but it’s a 500 patient study, comparing FOLFIRINOX as adjuvant treatment with gemcitabine, modified FOLFIRINOX, less toxic than standard FOLFIRINOX. So it will be very interesting to see what the results of that are. That’s already matured. And similarly there’s another trial of gemcitabine with abraxane sponsored and funded by Celgene compared to adjuvant gemcitabine. So as these trials mature it will be interesting to see which others are positive and, if they are, to look at biomarkers that will help us identify which of the different treatments are best suited for patients. That’s likely to lead to a further increase in survival because at the moment every arm gets the same treatment irrespective of the heterogeneity within that arm.


Even with what we know already, with gemcitabine and gemcitabine and capecitabine, it may be possible to actually select patients that will do better with either one or either arm or, indeed, with 5-fluorouracil.


That’s all I’ve got written down here to ask but that was before the many questions came at you in the press conference. Is there anything else that you would like to add?


It was a study conducted in 92 sites spread over six countries, this includes the countries comprising the United Kingdom but also a large contribution from Sweden, France and Germany. There is little doubt that this will now become the standard of care as adjuvant treatment for pancreatic cancer around the world.

23 Jul 2021
Diagnosis, testing and biomarkers in the individualisation of patient care with ...
Prof Andrea Necchi and Prof Eva Compérat

18 Feb 2021
A new way of thinking on the origin of breast cancer and how early breast cancer...
Prof László Tabár - University of Uppsala, Uppsala, Sweden 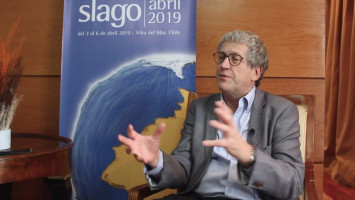