Historically, oncolytic viruses have struggled to compete with host immunity to reach their target and the immunosuppresive tumour environment. But by using a retroviral factor, Dr Kasahara's lab reports selective targeting of cancer cells with a gene primer that in turn responds to a non-toxic pro-drug to kill the 'infected' tumour cells.


The field of viral therapy for cancer actually dates back even to the beginning of the twentieth century where there were anecdotal case reports of kids, for example, who had lymphoma, contracted measles and then had spontaneous remission of their cancers. So there were actually trials of viral therapy using attenuated wild-type viruses injected into patients’ tumours throughout the 1940s and ‘50s. Unfortunately it was a race; we now know that the tumour environment is very immunosuppressive and is a very permissive location for viruses to replicate in but with these oncolytic viruses, as they were called, it becomes a race between the virus destroying the immune privileged, immunosuppressive environment that’s protecting them from the immune system and killing the tumour versus the immune system coming in to kill the virus. So then in the end often the virus lost, the tumour would recur and it was a therapeutic disappointment. So with the advent of modern chemotherapy, radiation therapy in the 1950s and ‘60s viral therapy just disappeared off the map.

Then fast-forward and now in the gene therapy field we use viruses as gene delivery vectors but replication defective vectors are not efficient enough in terms of delivering the genes to enough cancer cells. So a lot of the field has moved back to using replicating viruses. We still face the same problem, that the anti-viral immune response tends to try to kill the virus before the virus can kill the tumour so we decided to use a completely different virus which is a non-cytolytic virus, it doesn’t kill its host, it’s not a pillage, destroy, move on kind of virus. It actually is a benign parasite that deposits its genome, reverse transcribes its RNA into DNA and then integrates permanently into the chromosomes of the host cell. So it becomes a part of the cancer cell genome and the cancer cell can’t get rid of it. So it’s a very persistent, stealthy virus that buds off, cloaking itself in the plasma membrane of the host cell as it spreads through the tumour. So it’s relatively low immunogenicity. Even though it doesn’t naturally kill cells as it spreads, we can arm it with a suicide gene which actually encodes a pro-drug converting enzyme which basically now deposits this gene throughout the tumour. It’s like a time bomb and basically now the tumour cells are all primed to make this enzyme which will take a non-toxic pill which is a pro-drug which has no adverse effects systemically but then right inside the tumour will get converted into an active anti-cancer drug. So then you don’t get the systemic… because you’re forcing the tumour to create its own, manufacture its own, chemotherapy locally within itself you don’t get the systemic side effects and your immune system remains intact. We’ve shown that you actually get anti-tumour immunity being activated once you kill off enough tumour cells.

How does this treatment work?

We’re giving cancer a parasite that it can’t get rid of that replicates selectively in the tumour and nowhere else and forces the tumour cell to destroy itself.

How is this limited to only affect cancer cells?

There are multiple mechanisms at play and the first thing is that this is a simple virus that has no nuclear localising signal so it is incapable of traversing an intact nuclear membrane in quiescent cells and most of our cells and tissues are quiescent. So it needs to wait until a cell is actively dividing, the nuclear membrane dissolves during mitosis and only then can it access the chromosomes, integrate itself and fulfil its lifecycle. So that’s one mechanism of selectivity. But perhaps an even more important mechanism of selectivity is that we now know that tumours, cancer cells, evolve to have defects in innate immunity. Interferon signalling pathways are mutated because when those pathways are activated you do things like stop cell cycle, arrest protein synthesis, things that tumours don’t like. So tumours often evolve with defects in their interferon signalling pathways which makes it a very permissive environment for these viruses and provides that tumour selectivity.

Have there been clinical trials?

We were fortunate to meet with our biotech partners and a company called Tocagen, and a disclosure here – I’m a consultant for Tocagen, but they licensed our technology, they were initiated in late 2007 and since then they have conducted three early phase clinical trials, phase I dose escalation trials, delivering the virus in three different ways. One is a direct injection through a biopsy needle, another is a resection followed by injection around the tumour cavity margin and the third is now an IV trial where it’s delivered systemically and still batches hold through the leaky neovasculature into the tumour microenvironment and then spread selectively. Those trials are all in recurrent high grade glioma patients with brain cancer, terminal brain cancer, they’ve failed all other surgery, chemotherapy, radiation. Those trial results have been quite promising so far. Historically the benchmarks for this disease are about 7-8 months of prognosis. So once you’ve had a brain cancer, a high grade brain cancer and it has recurred and has failed prior therapy you have about a 7-8 month survival on average. So in our early phase trials so far we’ve seen the median overall survival is about 14 months and we’ve treated over 128 patients now in these three clinical trials. So we feel it’s extremely promising. By contrast, the latest chemotherapy drugs that were approved for glioblastoma, Avastin basically doesn’t improve median overall survival, it improves quality of life, temozolomide, which is the mainstay of therapy for glioblastoma was approved on the basis of phase III trials which showed a six week survival benefit. So we’re actually doing better than six months of survival benefit and that’s averaged over all dose cohorts .We see a dose response where the higher dose cohorts which were initiated later actually show longer, better results and we’re following those up now. But based on those promising results from the early phase trials late last year we’ve initiated a phase IIb/III trial for seeking registration. So this is now initiated in over twenty clinical sites in the US and Canada, we’re aiming to initiate seventy sites worldwide by the end of the year and hopefully because our benchmark is eight months of median survival recurrent therapies with this randomised trial versus current therapies we hope that within a year we’ll be able to get approval for our therapy.

What are the limitations?

That’s a very good point. What we would like is to further understand how to optimise the therapy. One of the striking things, however, in the median survival is 14 months or so versus 7-8 months with standard therapy but that’s the median and if you look at the survival curve you actually see a plateau. So 20-30% of patients when you average all dose cohorts, it’s actually better, more like 40% with the higher dose cohorts, but overall 20-30% of patients are surviving past the two year mark. So our two year survival rate is over 20%. This is a disease where you really almost never see a reported two year survival rate. So we think those patients are showing long-term durable remissions and we are hoping to improve that plateau. It’s very similar to what you see with checkpoint inhibitors so we think that’s indication that we are activating anti-tumour immunity which is allowing long-term survival of these patients and what we’d like to do is take that plateau and make it higher and increase the long-term survival of a larger and larger percentage of patients.

We are initiating this large phase II/III clinical trial. This will require 170 patients at multiple trial sites throughout the US, Canada and various other countries that we’re hoping to initiate in. But this is a large effort and so through these interviews and through working with patient groups we would like to try to maximise enrolment in these trials because we think it’s a very promising therapy and we think it will help patients. We’re hoping that patients will enrol on our trial and help with that effort. 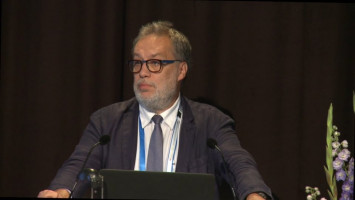