Prof Lonial talks to ecancertv at ASH 2015 about his study into the use of the monoclonal antibody daratumumab in patients with multiple myeloma.

This trial has led to the US FDA approval of daratumumab.

ecancer's filming at ASH 2015 has been kindly supported by Amgen through the ECMS Foundation. ecancer is editorially independent and there is no influence over content.


You’ve been looking at the use of a monoclonal antibody in patients with multiple myeloma who have had just about everything thrown at them already, haven’t you? This study, what do you make of it? What was done first of all, what was the big issue?

Daratumumab is an anti-CD38 monoclonal antibody and this study was a little bit of an update of the data that I presented at ASCO in June where we presented data on a hundred patients, over a hundred patients, that all got the same dose of 16mg/kg. This was the trial that led to the US FDA approval within the last two weeks. The update today presented by Dr Usmani pooled patients who got the 16mg/kg from our study with 16mg/kg from the GEN501 study, the paper that was published earlier in the year, and looked at aggregate response rates and duration of response.

So what were you getting in terms of response rates and the quality of response in patients who didn’t have alternatives at this point?

The response rate in aggregate for the two trials was about 31%, so one in three patients had a response. There were actually patients who achieved complete remissions or very good partial remissions, about 10%, so very good, and the durability of those responses among the responders was actually quite striking, close to a year in many patients.

And this is daratumumab monotherapy.

Is that the only way you would use it, in fact?

What sorts of toxicities do you get with this monotherapy?

The beauty of antibody therapy is that the main toxicity we see is infusion reactions, a reaction during that first or second dose of therapy. Beyond that the comment I had from a patient is, ‘It’s like I don’t have cancer anymore.’

What should doctors be making of this then?

This is a big game-changer for us. Having monoclonal antibodies in a disease like myeloma where we didn’t have them before and can attack the cancer through immune-based mechanisms is really exciting.

So this is third line, fourth line or whatever therapy. What do you see its role being as we move forwards?

A brief take-home from this for doctors?

Get ready. If you don’t have it already you’re going to have it and it’s going to make a big difference. 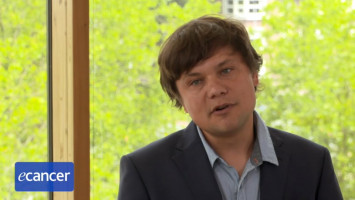