Dr Pietanza talks to ecancertv at ECC 2015 about a phase I study with the investigational agent rovalpituzumab tesirine (Rova-T) in patients with small cell lung cancer (SCLC).

During the interview she explains how Rova-T may offer new hope for patients with SCLC in whom treatment options can be limited due to diagnosis at a late stage when the disease has already metastasized.

Read the news story or watch the press conference for more.


You have been trying an antibody conjugate that is showing activity in a remarkable area, small cell lung cancer. Could you tell me about the study that you’ve been doing – what exactly did you do?

This was a phase I study where we included patients with small cell lung cancer who had relapsed or progressed after having have received one or two prior lines of therapy. The patients also had either chemotherapy sensitive or refractory disease and they were included in the study. We gave them this agent called rovalpituzumab tesirine or Rova-T.

And you got responses?

Yes. We got responses and we found that the agent was active in this population of patients and, more importantly, we found that the responses were more prolonged and more effective in patients whose tumours expressed delta-like protein or DLL3, which is a biomarker for response in patients with small cell lung cancer. Not only was it enough to express the protein, you had to have high expression of the protein.

So DLL3 is, in fact, the target for your conjugate, isn’t it?

And so what you’re confirming is that that is necessary to be there in order to have effectiveness. But how big an effect was this and how long were these responses?

So basically in these patients that we treated, for all comers or unselected patients we noted approximately a 28% response rate for patients that had been treated either in second or third line with a clinical benefit rate of about 68%. However, and more importantly, for patients who had high expression of this protein the response rates were approximately 45% and the durability is quite prolonged. In fact, for some patients we have not seen progression for over 190 days after first confirmatory CT scans and for patients where we have survival data the survival is about 300 days after first receiving chemotherapy… I should say this agent, it’s not a chemotherapy agent. This is quite significant in small cell lung cancer because it is rapidly progressive. These responses are usually not seen in our small cell lung cancer patients.

What kind of role do you think might such an agent have and how might you be individualising therapy on the basis of this biomarker in the future?

So how do you see this being used? For instance, could Rova-T be used earlier in the disease, perhaps even in primary therapy?

That’s a very good question. We are developing trials in various lines of therapy because one of the implications of the drug is that it might be targeting tumour initiating cells or tumour resistant cells in small cell lung cancer. So basically if we can get at those cells earlier in the disease state we might have more prolonged responses. So there are studies being developed along all lines of therapy.

Could you, in theory, use it concurrently with chemotherapy because it’s got toxicity only locally, hasn’t it?

That’s a good question. Some of the toxicities… we have seen toxicities that are similar to chemotherapy such as fatigue, there is some thrombocytopenia and some anaemia. It could in theory be used with chemotherapy, we still have to do the early phase trials though.

It is encouraging though, isn’t it, to see an agent that is extending life in small cell lung cancer. How do you think doctors should be viewing this development right now?

It is encouraging. As I said before, we don’t have very good agents in this disease, we don’t have agents that are really extending life in this disease. So this is really an effective agent, we have to continue to learn how to give it. I think that we should… And it has a biomarker, I think that’s really the important thing here, and while we should have trials that look at low expression  of the biomarker but really enrolling patients with high biomarker expression to reduce the amount of toxicity that we give our patients is really a good way to personalise therapy.

Does it open up the possibility of a new approach to small cell lung cancer, perhaps looking for other targets, other biomarkers?

Yes, and so this is a disease that is characterised by multiple mutations and multiple aberrations and many of these for many reasons cannot be targeted. Many of my colleagues who have proceeded me have tried and there are no targeted agents that have had therapeutic benefit in this disease. Here, for the first time, we have a protein that is over-expressed on small cell lung cancer cells and so for the first time we do have a targeted therapy. So what we can begin to do is obtain tissue for staining and this is not a mutated protein, this is a protein that is over-expressed on the small cell lung cancer cells. It’s just a modality for the agent, for the ADC, to enter the cell to release its cytotoxic agent and cause DNA crosslinks and cytotoxicity.

Do you think there might be others that could be used?

I’m aware that there are some other antibody drug conjugates being developed in small cell lung cancer, I don’t know how far they are along. But this one seems to have this really effective biomarker and high rate of response.

So what, very briefly, finally do you think doctors should take home from your findings so far?

That we have an agent in small cell lung cancer with a target and that patients have had a high response when their tumours overexpress this target. And that maybe as we are developing additional treatments in small cell lung cancer, as we’ve seen at this meeting, that for the first time we do have a biomarker so we can test the biomarker and if the patients are overexpressing it they can go on studies with this agent. For those that don’t express the target there are possibly other trials to put their patients on. 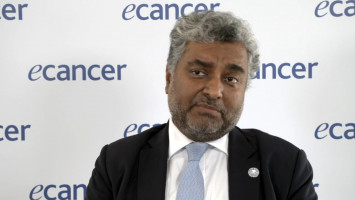 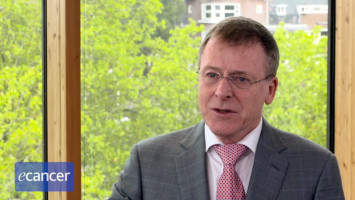