Prof Thomas Powles of Barts Health in London, UK discusses the use of the drug MPDL3280A to inhibit the protein PD-L1 in patients with metatastatic urothelial bladder cancer. Fifty percent of the patients involved responded to treatment.

We’ve been using a drug called 3280, which is a PD-L1 inhibitor, in a phase I trial. It’s a very large phase I trial involving what turns out to be hundreds of patients and the key to this is we’ve initially shown that it’s very well tolerated but we’ve now shown that this new immune therapy appears to be effective in a broad spectrum of cancers, one of which is bladder cancer.

What did you do in the initial phase?

Effectively what we’ve done is the initial phase was just dose escalation but then we expanded individual cohorts when we’d reached the right dose to see if there was an efficacy signal. So, for example, in the data that I presented yesterday we had treated 67 people with bladder cancer with advanced metastatic disease and approximately half of those who over-expressed the PD-L1 biomarker responded to therapy, their cancer shrank down. This is a very heavily pre-treated population so that result is somewhat surprising and it’s very positive. Clearly it’s initial results and subsequent results are going to follow with on-going randomised trials.

There are two ways of looking at it. It’s obviously a complex immune regulator. It works as an immune inhibitor, it camouflages the cancer cells from what should be T cell responses. Cancer should be identifiable because they present antigens and bladder cancer presents lots of antigens but the cancer manages to evade the immune system by over-expressing inhibitory, T cell inhibitory, biomarkers, one of which is PD-L1. Clearly if you inhibit, therefore, PD-L1 you inhibit that negative signal that allows the T cells to come in, particularly the CD8 cells, and attack the cancer cells and that results in a reduction in the cancer size and, we hope, prolong survival.

How significantly will this impact bladder cancer treatment in the future?

Bladder cancer is an area of huge unmet need, there are no targeted therapies or immune therapies in bladder cancer and the last drug to be developed successfully was probably about 30 years ago. And survival in bladder cancer hasn’t shifted over that period of time in metastatic disease. And a number of drugs, of course, have been tested unsuccessfully. This initial data is very promising, so much so that we hope that we can bring it in to treatment paradigms in the future and prolong survival.

What percentage of patients were responsive?

What should oncologists make of this data?

I think they should encourage people to enrol them onto these on-going trials that may change practice. Certainly we have patients who are coming from all over the UK to be treated at our centre and indeed internationally because it does appear that in subgroups of patients who have refractory disease, who over-express the biomarker, about half of those patients seem to be getting some genuine benefit from this in this early study.

Is there a case for fast-tracking a compound like this?

There is a fast-tracking discussion process and a prioritisation process so that will allow the on-going trials to be assessed more in real time to work out if there is genuine benefit. Because, as I said before, in an environment where there are no alternatives and second line chemotherapy really is ineffective, this approach, particularly potentially in subgroups of patients may be very attractive.

What is the extension of survival from your findings?

We really don’t know. What we do know is that the response rates are unexpectedly high and how that translates into a survival signal, we don’t know. One would hope that it would be significant and two of the patients who were treated achieved a complete response. Now that’s a small percentage on the one hand, on the other we haven’t been seeing that with other therapies before. So we hope it’s going to have a major impact on survival. But the key is we need to enrol into these trials to actually prove that these initial results are as positive as we think they are.

How optimistic should patients be?

I think there are two parts to that. The biomarker story is not answered yet; there are clearly subgroups of patients who do well with PD-L1 therapy and we know that. I’ve treated patients who were expected to do badly, we’ve given therapy to and they’ve done unexpectedly well. So there are subgroups who are benefitting, we do need to identify those subgroups. There’s also, in my opinion, a difference between biomarkers associated with response and resistance to targeted therapies and I’m not sure that in some areas, like renal cancer, hasn’t been successful, and biomarkers associated with response and resistance to immune-based therapies. The assumption that model A hasn’t worked and therefore model B won’t work is flawed. I think there’s a lot of work to be done there.

What’s your take-home message for doctors?

The bottom line message is that this preliminary data in a large cohort from a phase I study is unexpectedly good or surprisingly good. Actually, some say bladder cancer should respond to immune therapy but it’s really encouraging and we think it’s going to make a difference in the future but we have to test it robustly so let’s recruit into those randomised trials. 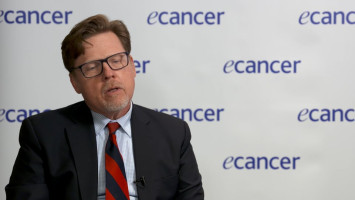