Dr Stein talks to ecancertv at the AACR conference about his study of patients with acute myeloid leukaemia who had a mutation in the IDH2 gene. By identifying the substance 2 hydroxyglutarate as an agent which increases levels of leukaemia, they are able to work on lowering the levels which are produced by drawing upon a new cancer metablism drug, AG-221.


Can you tell us a little about the work you’re doing with acute myeloid leukaemia?

And is the non-mutant form of IDH2 involved in normal haematopoiesis?

Do you have to look for the mutant before you can use your substance?

You do. So all patients, before they come on trial, need to have a confirmed mutation in their IDH2 enzyme. If they don’t have the mutation then we would suspect that they may not respond to the drug.

How many would patients with AML typically have?

Had these patients exhausted all other options?

The typical options, it’s sobering, but we’ve been treating acute myeloid leukaemia the same way for forty years. There has been one drug approved for acute myeloid leukaemia over the past forty years and that drug was pulled from the market a number of years ago after a brief stint on the market. So this is very, very different from what we typically do which is chemotherapy. The same chemotherapeutic agents that have a lot of toxicity, that have been given for the past forty years.

Could any of these patients have undergone an allotransplant?

So what happened in the study?

So these patients would ordinarily have died after a month – how are they now?

Of the patients that we’ve looked at they’re all doing quite well.

At how many months?

What should oncologists make of this?

These results, as you suggest, are extremely early but I think that if the data holds up in the next groups of patients that we treat this would really be a remarkable result because in these patients who have IDH2 mutations it would substantially alter the natural history of the disease and may provide a real benefit to them in terms of their quality of life and how long they live.

I would take home the following. Number one, you should check all of your patients for an IDH2 mutation because if they do have an IDH2 mutation and have relapsed or refractory disease this is an agent which really may provide clinical benefit to the patients where other things haven’t worked. 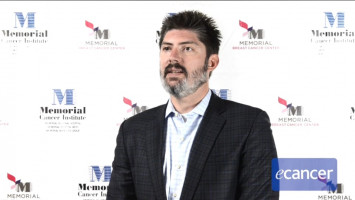