At a press conference during the AACR conference, Dr Finn discussed the results of a randomized Phase II study of PD 0332991, a cyclin-dependent kinase (CDK)-4/6 inhibitor, in combination with letrozole vs letrozole alone for first-line treatment of ER /HER2- advanced breast cancer (PALOMA-1; TRIO-18).

His research finds that PD 0332991, now known as palbociclib, holds new promise in the treatment of breast cancer.


What we’ll be reviewing now and shortly in the plenary session today are the final results of an open label randomised phase II study of palbociclib, prior known as PD-0332991, in combination with letrozole versus letrozole alone for the first line treatment of ER positive HER2 negative advanced postmenopausal breast cancer. This study is supported by Pfizer.

The molecule we’re talking today, palbociclib, is a first in class CDK4/6 inhibitor, cyclin dependent kinases 4 and 6. Cyclin dependent kinases have been around for some time, the Nobel Prize in 2001 being awarded to the scientists for their discovery and work on this. Palbociclib has been shown to block the transition from G1 to S in the cell cycle, that’s the place where CDK4 and 6 play a critical role in regulating cell metabolism. What is important to note is palbociclib, unlike CDK inhibitors prior, is very specific for CDKs 4 and 6. Earlier CDK inhibitors were more a pan-CDK, they hit other CDK kinases and had trouble in clinical development.

This slide shows you where we hypothesise palbociclib is working in the cell cycle. The cell cycle has been well defined as distinct phases, each phase is preparing for the next phase in cell division. CDK4/6 is dependent on another protein, cyclin D. Together CDK4/6 and cyclin D play a role in adding phosphates or hyperphosphorylating the retinoblastoma gene product. RB is critical for regulating the transition from G1 to S. Once RB is hyperphosphorylated it releases the brake from the G1/S transition. So the idea is by blocking this kinase you block the hyperphosphorylation of RB and therefore block cell cycle progression.

Now, breast cancer, we know for many years now, is a very diverse disease at the molecular level however still clinically we look at it as three large groups. There’s the ER positive group, the hormone receptor positive group, which represents about 60% of breast cancers and anti-oestrogen therapy is the backbone for that. There’s the HER2 amplified group which my colleague, Dr Slamon, described several years ago and led the development of anti-HER2 therapy such as trastuzumab or Herceptin. Then there’s the triple negative group which still is an unmet need.

Now, critical to moving a new drug into cancer medicine is identifying a population that might respond. We know that we might have the best drug but if you don’t get it to the right people you might not see benefit. Working with Pfizer Oncology dating back several years now, we evaluated palbociclib in preclinical models of breast cancer. Here you see about fifty cell lines representing the molecular diversity of breast cancer and their sensitivity is on the y-axis with the lower number here representing more sensitive. What we showed was that those breast cancer models that represented the luminal ER positive or even the HER2 amplified group were much more sensitive than those that were triple negative. Right away this raised a flag that there was a hypothesis of where to go with this molecule potentially in the clinic. We went on to show that in combination with anti-oestrogens there was a synergistic effect in blocking cell growth.

So that led to this phase II study which we’ll be looking at the final analysis today. It was designed as two parts that were accrued sequentially. Part 1 accrued 66 patients of frontline postmenopausal women selected based on being ER positive alone using standard immunohistochemistry techniques and randomised them one to one open label to letrozole versus palbociclib, 125mg on a three week on, one week off course. That dosing came out of an earlier phase I study that showed that it was tolerated and safe.

Once that was approved part 2 was performed which again used ER positivity as the selection marker but added to that genetic markers, genomic changes in cyclin D1, amplification by FISH or loss of p16. This was to test the hypothesis of whether or not we could further refine the biomarkers. But from the preclinical work the most important biomarker was ER.

Like most studies in advanced breast cancer, patients had to have measurable disease or bone only, good performance status, good organ function, and patients were stratified by their disease site and disease free interval.

This slide I added, it will be in the presentation today, I don’t think it’s in your handout. But this is just to show you that the arms of the study were generally well-balanced. It’s important to note that about a third of the patients had prior hormonal therapy in the adjuvant setting. Many patients also had chemotherapy but again this would all be in the adjuvant therapy setting.

This is the progression free survival curves, this is the primary endpoint for the study. As we saw in interim analyses in 2012 we see that the addition of palbociclib to letrozole is maintaining its dramatic increase in PFS. That is to say in the letrozole alone arm PFS was 10.2 months and that essentially was doubled to over 20 months. This was a hazard ratio of 0.488 or 51% decrease in the risk of progression with the addition of palbociclib; this was statistically significant.

If we look at part 1 and part 2 separately we see that there is a dramatic improvement in both arms regardless of those biomarkers. The most important selection marker here is ER positivity. It is of interest to note that the control arms did differently between the two groups and that might reflect how cyclin D1 or p16 selection affects response to letrozole. But, needless to say, the hazard ratios were 0.299 and 0.50 in each arm.

Secondary endpoints such as best overall response were consistently improved. As we saw earlier, in all patients 33 to 43%, in patients with measurable disease only 39% to 55% and the clinical benefit rate from 58% to 81% of patients receiving some benefit if you include for long stable disease.

This is the initial look at the overall survival. This look is based on the primary endpoint being met and this is the initial look. You’ll remember that survival events in ER positive breast cancer take time to evolve but we are very encouraged that the median overall survival is increased from 33 months to over 37 months. That translates to a hazard ratio of 0.81 which at this time is not statistically significant. There are only 30 events per arm and this will need to be followed up.

As we saw in earlier presentations there are no new toxicity signals with palbociclib and letrozole, the most common toxicity being neutropenia or leucopenia and fatigue. This neutropenia is not the neutropenia we see with chemotherapy, it is self-limited, it recovers quickly and most importantly we do not see neutopenic fever.

So, in conclusion, palbociclib is a first in class agent that’s blocking CDK4/6 which in combination with letrozole continues to show a significant improvement in PFS from 10 months to 20 months and a hazard ratio of 0.488. Secondary endpoints continue to be positive with the addition of palbociclib. Our first look at the survival data is very encouraging and we’ll continue to follow that over time. The safety of the combination seems to be manageable, well tolerated with uncomplicated neutropenia being the most common. Currently the PALOMA-2/TRIO-22 study is ongoing which will validate these in a double blind placebo controlled study.

I need to thank my co-investigators, without them this wouldn’t be possible, as well as the patients and their families who have dedicated their time to the study, the networks and investigator staff in the Revlon UCLA Women’s Breast Cancer programme which has helped support our work at UCLA. Thank you. 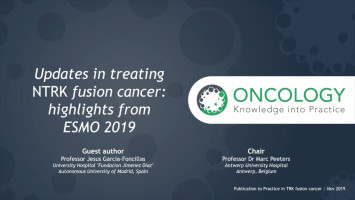